This fuel station will put University City on Tesla’s map 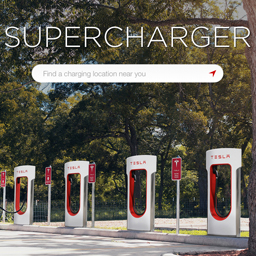 Tesla owners can recharge free and fast at Supercharger stations

New fuel pumps on Mallard Creek Church Road will put University City on the map – literally. The soon-to-open refueling facility at Cochran Commons will give fast, free recharges to Tesla electric cars. Tesla owners nationwide are eagerly watching the online map of supercharger stations for the day soon when our station opens for service.

Some Tesla owners are eager to see stations in Charlotte.“Not sure if this is covered elsewhere, but now that Charlotte is on the short list (for a Supercharger station), do we have any rumors or actual recon on where and when this one will go up?” posted Chas F on the Tesla Motors Club Southeast forum last March.

Responded ElSupreme, another Tesla owner, “I don’t know. But I am road tripping to Charlotte in the beginning of August. I really want a Supercharger so I can drive 80, and not 55 all the way there.”

Game-changing autos, for a price

If you haven’t heard of Tesla yet, you may be surprised to learn that 25,000 of the sleek all-electric vehicles rolled off of a California assembly line last year, and that the car has earned accolades from such diverse publications as Car and Driver (2015 10 Best Cars) and the British Telegraph newspaper (Top 10 Cars That Changed The World – And One That’s About To).

Besides being fast and expensive, with list prices topping $90,000 depending on model, a Tesla S equipped with the largest battery option can go 265 miles on a single charge, the EPA says – and even farther if you cruise at, say, 65 mph rather than 75 mph. Compare that to an EPA rating of 38 miles in electric mode for the Chevy Volt.

Equally stunning is the Tesla’s ability to get a 50% battery recharge in less than 30 minutes at a Supercharger station. And the charges are … yes, free!

“Charge your car quickly and be on your way,” explains a Tesla video about the Supercharger station. “It’s not just free now. By buying a Tesla you have free long-distance travel across America forever.”

We’ll be a Tesla travel destination

University City’s new Supercharger station will soon see an influx of those long-range Tesla travelers. Superchargers are designed for city-to-city travel, allowing Tesla Model S electric vehicle drivers to travel for about three hours, take a 20 to 30 minute break, and get back on the road charged up, the company says. Tesla picks locations that are near amenities such as roadside diners, cafes and shopping centers.

Why a station here?

Cochran Commons fits the bill nicely. It will be the lone stop along I-85 from Burlington to Atlanta when it opens and will also serve I-77 Tesla travelers when I-485 opens this spring.

As for amenities, Cochran Commons offers coffee at Cafeccino, food at McAlister’s Deli, Jet Pizza, Firehouse Subs and House of Leng, groceries at Harris Teeter and even a fast haircut at Great Clips. Hopefully travelers will not need the services of Fastmed Urgent Care.

Construction on the University City Supercharger began last month. The facility will cost about $100,000, with over half that cost for the electrical components. You can already see the red charging stations bearing the Tesla logo. The company also plans to open a sales and service center on East Independence Boulevard.

See a video explaining the Supercharger