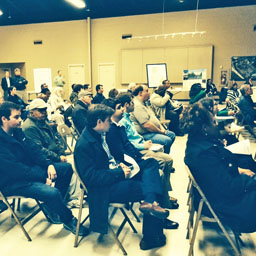 About 100 people attended the Dec. 9 public meeting on revisions to the University City Area Plan.

The purpose of last week’s meeting was to give the public a chance to review and comment on city planners’ efforts over the last several months to update the University City Area Plan, including transit-station recommendations contained in the update to the existing plan.

Specifically, the new document seeks to capture the public’s desires for future development at North Tryon Street transit stops at University City Boulevard, McCullough Drive and J.W. Clay Boulevard.
The meeting also included an update on the construction process for extending the LYNX Blue Line from its current downtown terminus at 7th Street to UNC Charlotte.

Charlotte-Mecklenburg planner Mandy Vari said that the planning staff has spent several months talking with major stakeholders including University City Partners to get a pulse on what’s going on in the area – especially concerning new development. The staff also has looked closely at how public plans and private efforts have reshaped areas close to the existing transit stations between uptown and Pineville.
“We have a lot of experience in South End of things that got developed under the current zoning ordinance – how ground-floor uses relate to sidewalks, and in generating active street-fronts,” she said.
That study will likely influence planned updates to the city zoning ordinance, beginning in 2015, she said. Meanwhile, planners are using the South End lessons to focus on smaller areas around the future North Tryon Street stations – perhaps within a quarter mile of each stop, Vari said. This will allow planners “to really think through” what is needed to create a pedestrian-friendly active environment that will support transit-station development.

The latest complete draft of the plan is now available to view and download at http://ucap.charlotteplanning. org.  At last week’s meeting, planners reviewed recent updates to the proposed plan, including suggestions that they have heard from the public over the past several months, and gave participants time to discuss the updates and offer feedback. (Presentation materials are also available at ucap.charlotteplanning.org

Among the public’s ideas that planners have tried to address in the latest draft are:
• Pocket parks and open space in University City.
• A major landmark or landmarks that tell visitors, you are in a special place.
• A town center at University Place.

The latter suggestion will depend on the property owners of University Place, most notably Columbus, Ohio-based Casto, Vari said. The plan does provide many suggestions for how that town center might look and feel.
Last week’s meeting drew “a very positive crowd,” Vari said. Participants particularly liked a station design showing clear glass, operable doors to encourage pedestrian activity, she said. “There was also support for building setbacks that accommodate outdoor seating and dining,” she said.

Post on line – The next draft of the Station Area Plans will be posted on line in the next week or so at ucap.charlotteplanning.org. The site features an interactive map that allows users to move their mouse over various areas to get specific information about recommendations. The full plan, if printed, runs about 150 pages.
Notify via post cards – Planners will send post cards in early January to about about 14,000 people who own property or live nearby or who have signed up for notifications about the plan.
Review by advisory committees – Two review groups will go through the plan and provide time for public comment.
First is the Planning Committee of the Charlotte-Mecklenburg Planning Commission, an appointed advisory body to Charlotte City Council.
Second is a regularly scheduled Charlotte City Council meeting, with an opportunity for public comment.  Transportation and Planning Committee (made up of several City Council members) will also review and provide input to the full City Council.
Vote by City Council – Finally, the City Council itself will review the document and consider the plan for adoption.

How you can take part

Vari recommends that people wanting to have a say in shaping the final plan begin by reviewing the document on line and using online channels to send comments directly to the planning staff by the end of January.
You can get in-depth information about the University City Area Plan, station area plans and the process for updating both at ucap.charlotteplanning.org.
The public can also sign up to speak at public comment meetings charmeck.org.
To sign up to receive notices about the process, click on the “Notify Me” red link on the top of the homepage for ucap.charlotteplanning.org.