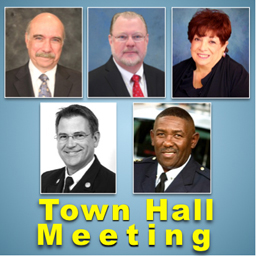 University City residents will get a rare chance on Sept. 28 to meet and ask questions of Charlotte’s leaders, right here on our own turf. Mayor Dan Clodfelter, City Manager Ron Carlee, Police Chief Rodney Monroe and Fire Chief Jon Hannan will join At Large City Council Member Claire Fallon for a Town Hall meeting from 2 to 4 pm at University City Regional Library. Space is limited, so you must RSVP TO ATTEND.

A chance to meet our new mayor and others

Fallon, who lives in the Davis Lake area, organized the meeting in part to help University City residents get to know Charlotte’s new mayor. Charlotte City Council appointed Clodfelter as mayor in April to replace former Mayor Patrick Cannon, who resigned following his arrest on corruption charges. Clodfelter, an eight-term state senator, also served on the council from 1987 to 1993. When she led the now inactive Northeast Coalition, Fallon often invited top city officials here to speak to the community. She says she decided it was time to revive the town meetings, starting with Mayor Clodfelter.

“I said, ‘Dan, people don’t know you where I live. They don’t come down to the city. Will you come up there and let me introduce you to the area?’ And he said, ‘yes.’”

Fallon figured, why stop there? She invited City Manager Carlee to join Mayor Clodfelter in discussing their “Vision for the City.” Fallon chairs the council’s Community Safety Committee and decided to invite Chiefs Monroe and Hannan to share updates and trends in their departments.

Fallon’s hope for Sept. 28 – plenty of people and questions

Fallon said she will make sure that the audience has time to ask questions and make comments. Her best hope for the event “is that we get a good crowd of people from all over Charlotte, and that people will understand what’s going on,” she says.

“I want people to ask the city manager where his ideas are going. I want people to question the police and fire chiefs and to tell them how wonderful they are, because they are. And I want people to realize that there is someone (at city government) to reach out to.” If the Sept. 28 meeting draws a good crowd, Fallon says she will try to have additional meetings every couple of months.

A chance to meet Fallon, too

The Sept. 28 meeting will also give people a chance to get reacquainted with Fallon, a longtime University City neighborhoods activist who has both strong opinions and a knack for finding common ground. A Democrat, Fallon is vice chair of the council’s Intergovernmental Affairs Committee, which seeks to promote Charlotte’s interests to the Republican-controlled state legislature. She also is an unabashed cheerleader for University City with plenty of ideas to make it even better, starting with high-end housing. Just ask her on Sept. 28.

How to RSVP for the Town Hall Meeting

The Town Hall Meeting will take place 2-4 pm Sunday, Sept. 28, at University City Regional Library, 301 E. WT Harris Blvd. (just south of CMC-University). The meeting is open to all city residents. However, you must make an RSVP to attend because the community room has limited seating.

To RSVP, call the City Manager’s office weekdays at 704-336-2180 or email Kim Oliver at koliver@charlottenc.gov.