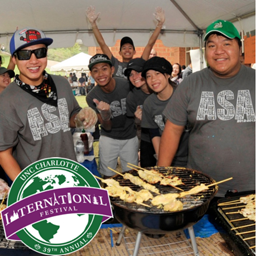 Enjoy tastes from across the globe at the International Festival

“See the world, in a day,” proclaims a video for the 39th annual International Festival on Sept. 20 at UNC Charlotte. Thousands of visitors will sample foods, savor performances and browse displays representing more than 50 nations at the region’s largest and most culturally diverse festival.

For the first time, the rest of the world can take part, too – via a live Internet broadcast over livestream.uncc.edu. Our global audience (and those of us who can’t make it to campus) can share the live performances along with interviews with participants, festival goers and performers, and pre-recorded videos aimed at aimed at educating and highlighting specific cultures and their presence within the Charlotte community. UNC Charlotte’s office of University Communications is producing this first-ever broadcast.

Still, there’s nothing quite like the reality of mingling with thousands of people from across the globe. From 10 am to 6 p.m., the Barnhardt Student Activity Center will fill with the sights, music, voices, faces, fragrances, aromas, colors and tastes of 50-plus nationalities.
Entertainment will include The Festival of Music and Dance at noon and 3:45 pm, the Celtic Folk Band at 1 pm, the Andean music group Alborada throughout the day and the Parade of Nations at 2 p.m.

Since its inception in 1975, the University’s longest-running cultural event has celebrated the ever-expanding global landscape at the University and throughout the region. More than 1,100 students from 80+ nations now study at UNC Charlotte.

The festival is centered around booths arranged in colorful marketplace style representing the cultures of over 50 nations. The booths are staffed by UNC Charlotte international students and members of Charlotte’s international community and feature art, crafts and costumes from each participating country. Many booths offer international food for sale.
Throughout the day the music and dance of a variety of nations will be presented on indoor and outdoor stages. In addition, the festival, which is family-oriented, offers a number of elements such as mimes and face painting designed specially for children.
In addition to the hallmark elements, the festival includes an international games zone for attendees of all ages to participate in and learn about the cultural significance of various games. Participants can learn the rules of bocce, play a game of life-sized chess, or join in a soccer match.