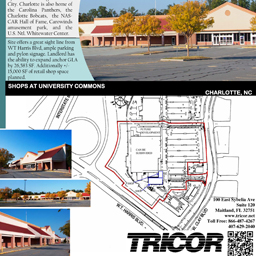 The long-vacant former Walmart building at University Place appears to have new tenants on the way. Property owner Tricor International Corp. has updated its leasing materials for the property to show a 44,945 SF space occupied by Conn’s Inc. and a 60,419 SF space occupied by Titan Fitness. Titan operates several gyms in Charlotte under the name of Fitness Connection, including one at 8404 N Tryon St.

Neither Tricor nor Titan responded to requests for further information. Here is what we do know about the companies.

Florida-based Tricor International bought the 126,397 SF building and its 15.6-acre site at University Place in August 2013 for $5.4 million, tax records show. Tricor renamed the property the Shoppes at University Commons. Sales materials say that the building can be expanded by 26,583 square feet. “Additionally, +/- 15,000 SF of retail shop space is planned,” the marketing brochure says.

The brochure notes that three spaces remain available to lease: 36,256 SF, 7,905 SF and 8,000 SF. All can be subdivided. Unless Tricor undertakes massive changes, the site should require no rezoning for new tenants. However, because the property is within University Place, the site is under review by the University Place Owners Association.

Conn’s is a Texas-based specialty retailer of home appliances, furniture, mattresses and consumer electronics. It also has a consumer credit arm. The company has expanded rapidly in recent years. In September 2013, The Charlotte Business Journal reported that Conn’s had leased a 300,000-square-foot industrial building in southwest Charlotte as part of its plans to expand across the Southeast US.

The company opened two stores in South Carolina this year, and in August The Business Journal reported that Conn’s would open its first NC store in the Carolina Pavilion retail center on South Boulevard.

McLean, Va.-based Titan Fitness has been expanding nationally for several years and in 2012 acquired Sports & Fitness Clubs, with several gyms in Charlotte. Those centers, including one at 8408 N. Ttryon Street, now operate under the name of Fitness Connection.