Great news about our neighborhoods in the Sunday paper! 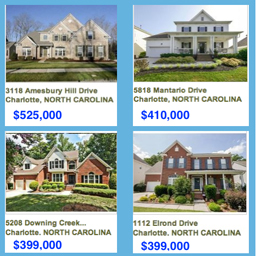 University City neighborhoods recently got a big plug in the Sunday Charlotte Observer.

We love it, and it gets better! The home pictured on the front cover is a mile from University Research Park. The home on the back cover? A $3.5 million mountain estate.

OK, so maybe the change here is not THAT dramatic. But as the news article inside makes clear, we have good reason to cheer a strong demand for housing occurring just beyond the borders of University Research Park.

For starters, the 28269 ZIP has become one of the hottest areas in the country for move-ins. As we reported recently in our UCP e-newsletter, a published study by Welcomemat Services ranked us No. 6 of all ZIPs nationwide for move-ins, and neighboring Huntersville, which includes some University City neighborhoods, at No. 20.

No. 2, University City has witnessed an explosion in public and private investment over the past year. Our 2013-14 Economic Development Report, released last spring, found $2.4 billion in new roads, light rail, university construction, multifamily housing and company expansions. We also found more than 2,000 new jobs announced in the past year by URP businesses.

Longtime experts on University City housing, John Kindbom with Allen Tate and Lisa Turley with Helen Adams Realty, told the reporter for the home | design article that many people are moving here for jobs, to live near where they work, and to take advantage of future amenities such as I-485 and the Blue Line Extension.

The article also cites MLS data showing a 30% surge in the median price point over the last two years for houses in the 28269 ZIP.

But, as they say, a picture is worth a thousand words. Along with the news article are photo spreads and descriptions of five homes listed for up to $525,000 in Highland Creek and other University City neighborhoods.