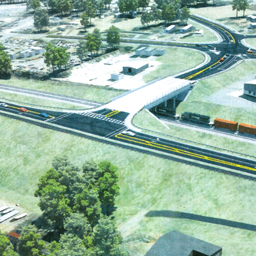 Staff gave quick summaries and benefits for several projects, focusing on light rail, related improvements to the North Tryon corridor, and the high-speed rail line beside Old Concord Road. They also responded to numerous questions about dealing with the construction and invited people to stay afterward and get more detailed answers to specific questions.

“We want to emphasize that a lot of good things are about to happen in your neighborhoods,” said city engineer Jim Keenan, “but it is going to be painful, and we recognize that.”

The turnout pleased and surprised District 4 City Councilman Greg Phipps. Cars overflowed the church parking lots and spilled across the lawn. Phipps told the audience that Thursday’s meeting was a follow-up to one he had held with nearby residents last April. “Little did I know we’d have the turnout we have tonight,” he said.

Several Autumnwood residents came to learn about city plans to realign Rocky River Road West at North Tryon Street and about the impact to the road from new student housing and a replacement for Newell Elementary School, both under construction near North Tryon Street. School Board at-large member Erika Ellis-Stewart and NC State Senator-elect Dr. Joyce Waddell also attended.

A second major theme of the evening was the need for everyone to communicate. Phipps said he has heard concerns that local and state agencies may not share important information, such as project start and finish dates. “We are talking to each other and making a coordinated effort to minimize traffic disruptions while delivering projects on schedule,” he told the audience.

Staff also need to know how to best communicate with you, Keenan said. He encouraged everyone to fill out a brief communications survey before leaving.

Here is a summary of main projects covered at the meeting; questions from the audience; and staff responses.

The I-85 widening is finished. I-485 and the new interchange will open to traffic in December, allowing the interstate and finished outer belt to provide some traffic relief for other projects, said Scott Cole, NC DOT deputy division engineer for the 5-county region including Mecklenburg.

This is part of a much bigger project to construct high-speed rail lines between Washington and Atlanta. The 92-mile Piedmont Improvement program is upgrading the NC Railroad Main Line east of Charlotte and making other improvements to allow more and faster trains that operate on consistent schedules. Similar improvements near the Rowan-Davidson county line opened in July. Passenger trains will be able to increase their speeds from 45 to 65 mph. The full project should be complete in December 2017.
Timetable: Spring 2014-December 2016
Project details:

Work has begun on the transit corridor through UNC Charlotte

As with the original Blue Line, the city will ask voters to approve several bond issues to help pay for transit-related improvements along the light-rail line. These improvements include upgrading nearby streets and providing more bike and pedestrian lanes. One of those projects involves improving the capacity and safety of Rocky River Road West near North Tryon Street. A large college-focused housing complex is under construction along North Tryon Street and Rocky River Road West, with a secondary entrance on Rocky River Road West. Next to that, Charlotte-Mecklenburg Schools is building a replacement for Newell Elementary School. The road improvements will be partly funded by contributions from CMS and the apartments developer.
Time – Not set. Depends on voters approving bonds.
Improvement area – North Tryon Street to Batavia Lane and hopefully to Toby Creek.
Project scope: