So far, so good on future roadways to ease congestion west of I-85 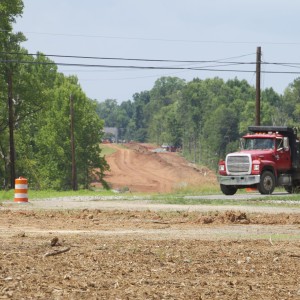 The path of the future link between Graham Street and Mallard Creek road takes shape.

When finished in 2017, a much wider segment of Mallard Creek Road and two new four-lane highways will link University City Boulevard, I-85, Graham Street and Harris Boulevard. Clearing and grading continues on the new segments, with little impact on traffic. However, utility work could cause a few delays this summer on Mallard Creek Road.

The state recently began preliminary clearing for the long-planned Graham Street Extension/Mallard Creek Road widening and realignment around the Derita business district. The city of Charlotte started clearing and grading in November to extend University City Boulevard from Neal Road to the new Mallard Creek Road. Both city and state crews are installing culverts now and then filling in the low areas.

The University City Boulevard Extension will run across mostly open land except for a short stretch on its western end where it will follow part of Rumple Road. University City Boulevard and Mallard Creek Road will meet at the current jog on Rumple Road. The $10.8 million city project is projected for completion in June 2015, two years earlier than the Mallard Creek Road completion.