You can taste the benefits of diversity at our Indian restaurants 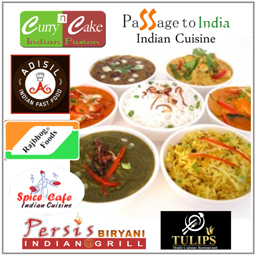 We often talk about University City’s openness to many cultures. We even have data. Restaurateur Andy Singh and his peers, meanwhile, are building businesses on that acceptance. Singh’s Passage to India near campus attracts Indian and non-Indian diners alike with its focus on fresh ingredients, toned-down spices, vegetarian entrees and low prices – including a $4 box lunch.

“I see sometimes, at dinner or lunch, where I don’t find a single Indian” customer, Singh says – a surprising yet crucial stat, since Indians comprise just 2% of University City’s 160,000 residents. All six other Indian restaurants here have taken similar steps, Singh adds, with similar results.

Indian restaurants have been serving University City customers since at least the mid-1990s. Our growing university, IBM and other early research park companies attracted Indians to University City, and the first restaurants soon followed. Today, more than a third of Charlotte’s 6,000 or so Indian residents and students live in University City – particularly in apartments and neighborhoods near the research park but also, more and more, in Highland Creek, Singh says. Indians also make up about a third of UNC Charlotte’s 1,200 or so international students.

Singh started in the restaurant business about 14 years ago and ran Bombay Cuisine at Grande Promenade for several years. Spice Café Indian Cuisine now operates in that location. Singh and his partner, Jorge Yol, opened Passage to India five years ago in the small retail center on University City Boulevard at Kirk Road. Two other Indian restaurants had operated there previously.

India’s (softened) flavors at our doorstep

Singh says that our restaurants offer a fair sampling of India’s four major regional cuisines – Southern, Northern, Western (Mumbai) and Indo-Chinese (often referred to as Fusion). Regardless of their focus, all of University City’s Indian restaurants have toned down the spiciness of many Indian dishes to appeal to the American palate, Singh says.

Most of the restaurants, even ones that focus heavily on a particular Indian cuisine, offer buffet lunches that let people explore various dishes and Indian cuisines, usually at lower lunchtime prices. Several restaurants including Passage to India also reach out to Islamic residents of University City by following Islamic dietary rules.

Singh says many University City customers have discovered that Indian foods are healthful and affordable as well as tasty.  “The key to the restaurant is our fresh food,” he said. “We don’t have anything frozen.” Plus you’ll find many vegetarian choices at Indian restaurants. “If you see American food and if you have vegetarian, it’s probably the salad,” he said, laughing.

Singh said he came up with the $4 vegetarian box lunch and $5 chicken box lunch to appeal to college students’ affinity for cheap fast-food take-out. He also gives UNC Charlotte students an additional 10% discount.

Our newest Indian restaurant takes the fast-food approach even farther. Adisil Indian Fast Food at The Arbors displays its menu on flat-panel screens and offers traditional Southern Indian foods in modern American style, such as the 99 cent Curry Sandwich.

Explore India yourself with our seven restaurants

You may never have a chance to explore India, but you can sample its culinary delights right here in University City. We’ve compiled a handy guide to get you started. Let us know what you discover!

This fast-food-style restaurant opened early this year in The Arbors center off of Mallard Creek Church Road. Customers order at the counter and carry their own food to their table.

Passage To India is one of its own kind. We offer food with diversity & distinctiveness. We offer North, South Indian and Indo-Chinese Food.

Persis Biryani Indian Grill North opened in fall 2013. It is part of an “authentic South-Indian style restaurant chain specializing in hyderabadi dum biryani. The company is based in Ohio, with 27 locations including University City and Ballantyne.

Rajbhog of Charlotte has both an eat-in restaurant and a grocery carrying a complete line of Rajbhog products including frozen vegetable, ready to eat foods and ice creams. The restaurant offers Indian fast food such as Samosa, Chaats, Dosa, Lunch and Dinner. Rajbhog also offers over 60 different varieties of fresh sweets. Referred to as fast food, Rajbhog’s fare is not comparable to the precooked hamburgers that sit wrapped under lights until ordered. The food here is made to order with fresh ingredients, herbs and spices. The “Rajbhog” concept started over two decades ago in a small sweet and snack shop located in Jackson Heights, New York. Rajbhog now has 10 locations.

Fine dining for the entire family. Spice Cafe is a groundbreaking restaurant serving Indian Cuisine. The Décor at The Spice Cafe is modern and Family style, yet very cozy and eclectic. We serve a wide variety of drinks and wines. Spice bar is open nightly to fix your craving for ean xciting combination of both signature and innovative cocktails and refreshingly sparkling and other popular wines by the glass and bottles.

Tulips says that its mission is to sell “delicious and remarkable” Halal foods, and to provide food that “combines both modern-creative and traditional Southern styles of cooking.” Offerings range from South Indian buffet to hand-blended milk shakes.