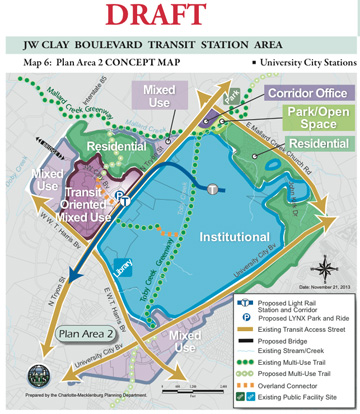 The vision contained in the plans, already influenced by public comments at two previous workshops, imagines areas within a 5- to 10-minute walk of the North Tryon Street stations evolving into an inviting, pedestrian- and bike-friendly urban community of multistory offices, shops and residential buildings. The plan then seeks to create the environment to bring that vision into reality.

Among the draft plan’s details:

The draft proposals for North Tryon Street stations at University City Boulevard, McCullough Drive and JW Clay Drive started with the vision already crafted in the 2007 University City Area Plan; lessons learned from development taking place near light-rail stations along the original Blue Line to south Charlotte; and public comments collected at recent workshops. While businesses would implement most of the plan’s hoped-for urban makeover, the area plans can set the stage through zoning, street requirements, design standards and public investments in things like libraries, greenways, new bridges over I-85 and, most important, the $1.1 billion LYNX Blue Line Extension.

The March 11 presentation included time for public reaction. Even after two previous community meetings, people viewing the plan had concerns they wanted to emphasize, including:

The station area plans are part of the overall University City Area Plan. That 2007 planning guide looked ahead at how the main University City business district might evolve, especially if a light-rail line was built along North Tryon Street. At the time, planners made assumptions about the location and number of stations for their recommendations. Planners updating the document now know exactly where the stations will go, and when. They also have the benefit of watching how development has occurred near existing light-rail stations on the Blue Line south of Center City.

The yearlong revision process started last fall and will include one more community meeting in early summer before planners present their final proposal for approval by the Charlotte City Council. The City Council will hold a public meeting on the plan, where people can address the council. The plan may go through additional refinement before the City Council votes whether to adopt the plan, probably by early next fall.

The complete draft, contained in about a dozen documents and heavily illustrated with photos, drawings and maps, is available online at UCAP.charlotteplanning.org. The plan splits the three stations into two zones – One south of Harris Boulevard includes the University City Boulevard and McCullough Drive stations, and one north of Harris includes the JW Clay Boulevard station and University Place.

Needless to say, the plan covers a lot of ground ranging from policy guidance for future capital projects to detailed descriptions of structure designs.

The plan says that buildings located close to sidewalks can be vibrant gathering spaces.

Keep buildings attractive to pedestrians – The plan recommends several design considerations that make areas near each station more conducive to walking. These include requiring “active ground-floor uses” such as shops with exterior entrances, placing buildings close to the street and parking to the rear, and providing open space and/or pedestrian amenities near the station.

Create a new town center at University Place – The plan suggests that the transit station at JW Clay Boulevard “provides an opportunity to reinvigorate the area as it redevelops to a pedestrian-oriented town center … University Place should redevelop into a focal point of University City by locating several uses within walking distance of each other and transit station.” The plan includes many details on how to help that happen.

New roads, bridges and more – The plan would require short street blocks of about 400-500 feet throughout the business district. A network of streets would emerge as development takes place. Also in the plan: two new bridges over I-85 near IKEA and at University Place that would provide safe passage for pedestrians and cyclists as well as vehicles; a network of bike-pedestrian corridors; and a new street parallel to North Tryon on its southeast side that would run from the campus to the the Home Depot shopping center, with a signalized intersection at Harris Boulevard.

Stay informed, have a say

The public can continue to learn about, review and comment on the Station Area Plans through public meetings, emails and an online comment system.