Stars and fans will fill Hilton for Mad Monster Party 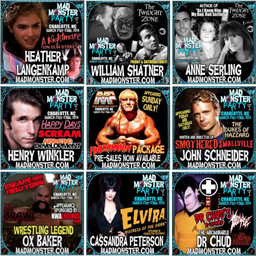 So many stars coming to the Hilton!

What do Henry Winkler, Elvira, William Shatner, Hulk Hogan and John Schneider have in common? They’ll all be at University Place in two weekends, wowing thousands of horror, sci-fi and wrestling fans.

The Mad Monster Party, a “frighteningly fun festival for the whole family,” will take place March 21-23 at the Hilton. If you like gore, fantasy and celebrity, the Hilton will be the place to see, be seen, wear costumes if you dare and gather memories, memorabilia and photos with the famous and near famous.

How do you top that? Move to the Hilton at University Place and bring in even more celebrities (do they get much bigger than Star Trek’s Shatner or wrestler Hulk Hogan?). The lineup of guests reads like a Who’s Who of horror movies.

Put together a three-day flea market of old movie posters and other collectables, with vendors ranging from Morris Costumes to Chocolate F/X, offering “custom handmade chocolates with a spooky twist.”

Stage a dozen wild shows, including the “Miss Scarolina Pageant” on Saturday evening, a Midnight Saturday showing of The Rocky Horror Picture Show (with special guests), and a sneak preview of “Smothered,” a turn-the-tables-on-the-villains gorefest by John Schneider – yes, the “Dukes of Hazzard” guy, who will indeed be at the Mad Monster Party.

You can almost hear the buzz coming off the Mad Monster Party Facebook page, which as of last Friday had 8,037 likes and 9,474 people talking about it. Check out the photos area to see all the celebrities who’ll make appearances. “This is my first time attending ANYTHING LIKE THIS! I am so excited,” posted one fan. Wrote another fan, “I bought tickets for Sunday but just saw Elvira got added for Saturday. I have to meet her.”

A big part of the event is getting close to the many actors and artists who created those shockingly memorable moments on the big screen and wrestling mat. For close encounters with the truly famous, expect to pay. A photo-op or autograph signing with William Shatner or Cassandra Peterson (Elvira! Mistress of the Dark!) costs $75 – each – in advance. You’ll pay $100 for a photo or autograph signing with Hulk Hogan.

But you can also spend time with many of the other people who made these movies, like William Jones, who posted this on Facebook last week: “I am an actor in the movie Cabin Fever. I was the truck driver … I will be appearing at the Mad Monster Party on Saturday March 22 all day. Drop by and get an autograph. Come by and support all the actors. See you there.”