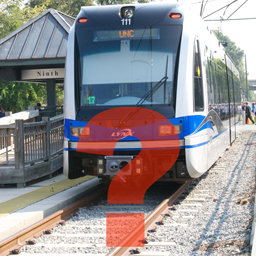 Charlotte planners seek feedback on their plans for development near transit stops.

Try to imagine how light rail might transform car-focused North Tryon Street between the I-85 exit and UNC Charlotte. Could a South End-style makeover happen here? Should it? About 60 people met last week to consider that idea, as expressed in a proposed update to the University City Area Plan. City planners laid out their proposals for movement and design near three future stations, and asked for feedback. “A lot of comments were, surprisingly, related to pedestrian access, which is great,” said Amanda Vari, the project’s principal planner.

“We are trying to develop walkable transit areas, but we also have a huge campus across the street, and we are trying to connect to the campus, as well.”

What is the University City Area Plan?

Area plans seek to express a vision for how a particular part of Charlotte should develop and then suggest government and private actions that can turn the vision into reality.
University City Partners spearheaded the drafting of the original 2007 University City Area Plan, which looked ahead to the coming of light rail and its impact on the North Tryon Street area near campus. The city is updating the plan to better reflect current conditions in University City, including major changes to the light-rail line itself – which now has three stations rather than four east of I-85, with two of the stations in different locations than envisioned in 2007.

The Feb. 18 meeting at the Oasis Shrine Center in University Place is the second of three public meetings on the area-plan revisions. The first one, in December, provided an overview of the 2007 plan and reasons for revising it now.
The Feb. 18 meeting focused on how cars, transit, pedestrians and cyclists might move throughout the business corridor, and on ways to make the expected urban-scale development most accessible. Planners showed current and proposed street improvements including where bike lanes and greenways might go in the future. For instance, the plan calls for future roads crossing I-85 to University Research Park near IKEA and at University Place, and for completion of East McCullough Drive.
“We did hear support for the bridges that are intended over I-85 to make connections to the research park,” Vari said. The library is one key location that people want pedestrian access to, she added. The other is simply how to get from Point X to each station. “What is going to happen in terms of different transportation modes – bike lanes, sidewalks and new roads?”
One suggestion planners heard was to extend McCullough Drive across Harris Boulevard and through the hospital property to UNC Charlotte.

The other main topic on Feb. 18 was creating community design guidelines that encourage a more walkable form of mixed-use development (where housing, stores and offices are mixed together; University Place was the region’s first mixed-use center). The plan suggests using design standards to encourage buildings that are more inviting to pedestrians, with numerous street-level doorways and corner stores at street intersections.
The plan also envisions J.M. Keynes Drive, which parallels North Tryon Street within University Place, as a Birkdale-style walkable “Main Street”.
Vari said that people at the meeting suggested requiring more parking decks and energy-efficient buildings and providing more parks. Land for parks is scarce along North Tryon, Vari said, but the plan can include design policies that encourage open space within private development.
One big North Tryon Street property is excluded from the plan rewrite – the UNC Charlotte campus. Charlotte has no say over its development, Vari said. The university recently updated its own master plan, she noted, and city planners are working with those plans in shaping the University City Area Plan.

At the final public meeting on March 11, planners will present draft recommendations that reflect public comments, along with revised policies and maps. Planners will then use those documents to develop the concept plan that will be available for public comment and review soon after the March meeting, Vari said. The final step will be the adoption process, including review by the city’s planning committee and a vote by the full City Council. That process usually takes three-four months, including a City Council public hearing.

Extensive planning documents including public comments from the December and January meetings are available online at http://ucap.charlotteplanning.org. You also can provide feedback via a new public comment application on the website. For more information, contact Amanda Vari at avari@charlottenc.gov or 704-336-5718.