University City’s network of greenways, bike lanes and bikeable sidewalks – already the region’s biggest – will soon get major additions with two notable enhancements.  The 1.2-mile Toby Creek Greenway extension will include a stretch of concrete-topped walkway running 8-10 feet above Toby Creek, while the mile-long bike-ped pathway from UNC Charlotte’s main entrance to Mallard Creek Church Road will feature brick topping within the campus. 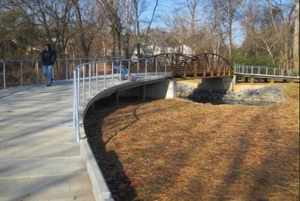 When the Toby Creek Greenway extension to the Autumnwood neighborhood opens in 2016, people will understand why it took so long to fund, design and build just 1.2 miles of greenway. The challenging topography will require an extensive sloped boardwalk rising 8 feet or more above little Toby Creek just southwest of Rocky River Road. The boardwalk will also have a concrete top to make it safer and longer lasting. The greenway must also squeeze through a culvert near the Target and Lowe’s stores, cross a wetland and run beside busy University City Boulevard before it crosses that highway and links into the existing greenway at UNC Charlotte. “The designers struggled with it for a while because the budget was running tight,” explained greenways planner Gwen Cook. “But then NC DOT (department of transportation) allowed them some additional funds.” The city of Charlotte and the Carolina Thread Trail are also helping pay for the new greenway. The public-private funding reflects the importance of the Toby Creek Greenway as a key leg of both the city’s Cross-Charlotte trail, a planned 26-mile trail from UNC Charlotte to Pineville, and the Carolina Thread Trail, an ambitious plan to link together the 15-county region with hundreds of miles of paths and greenways. While the new leg of the Toby Creek Greenway will end near Rocky River Road, future extensions will take it to North Tryon Street and, ultimately, to the Little Sugar Creek Greenway near downtown.

Besides being extra wide to handle both cyclists and walkers, the path will have a brick top once it reaches the campus.

While the sidewalk looks nearly complete in some areas, the eastern half required retaining walls and extensive filling first. The last step is to put down asphalt, which can’t be done during the winter. That will take place beginning next March.