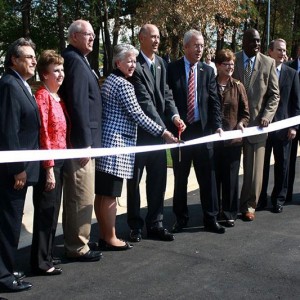 Gov. Pat McCrory was on hand on Dec. 12 when Electrolux Major Appliances North America broke its big news. The Swedish home appliances company will double its workforce at the University Research Park headquarters for North American operations. To house the 800-plus extra people, the company will spend $85 million on a 375,000-square-foot office building in the 90-acre URP campus. The Charlotte Observer reported that jobs will include research and development, design, engineering, sales and marketing and executive management.

Cardinal Innovations Healthcare Solutions announced in early January that it is opening an office at Prosperity Place III and plans to add about 80 new jobs over the next three-five years. The managed-care organization has a network of over 900 providers for 1.4 million North Carolinians. Prosperity Place III, a Class A office building with 122,000 square feet of space, is at 10150 Mallard Creek Road.

The online marketing company Yodle held a ribbon-cutting in October for its new 35,000-square-foot office in URP’s Cambridge Corporate Center. Yodle, based in New York, has about 130 employees in Charlotte and said it plans to double that number rapidly.

Rack Room Shoes announced in March that it would move a subsidiary to the company headquarters in URP and add about 87 jobs by 2017. Off Broadway Shoes Warehouse, now based in Atlanta, has more than 450 stores in 34 states. Rack Room Shoes said it will add a second building about the same size as its 87,000-square-foot facility, and link the two with a 10,000-square-foot atrium. The expansion will cost about $16 million.

Red Ventures, the rapidly growing online marketing company based in Fort Mill, announced in July that it would open a new office in the Environmental Way office building in URP. The company signed a six-year lease for half of the 71,000-square-foot building at 1000 Louis Rose Place with the option to lease more space as well the right to buy the building, its 9.5-acre campus and two adjoining undeveloped parcels totaling $14 million. Red Ventures began in 2000 and today has more than 1,900 employees in five offices across the U.S., including the 150,000-square foot campus in Fort Mill. In December, Red Ventures announced that it is hiring 200 more employees in the Charlotte area, with 20 of those positions at the URP office.

Convergys, a customer-management services provider with more than 80,000 employees, announced in February that it would hire 1,600 people in the Charlotte area for its call centers at Cambridge Corporate Center in University Research Park, and in south Charlotte. The majority of the jobs were expected to go to the south Charlotte facility, since the URP call center is close to capacity. Among Convergys clients served by the URP center is OnStar. As big as Convergys is, it will soon get much bigger. On Jan. 5, Reuters News Service reported that Convergys planned to buy rival Stream Global Services. That company, with 40,000 employees, provides customer relationship management services in 22 countries. The two companies will have combined annual revenue exceeding $3 billion.