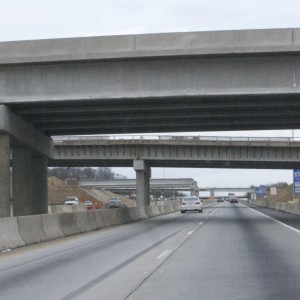 Bridges are going up on I-85 for the I-485 interchange.
Three transformative transportation projects made big strides in 2013. One, the I-485 Outer Belt, may even open for use by the end of the year. Meanwhile, Charlotte engineers with the LYNX Blue Line Extension tell us to expect construction work and traffic delays to take off this spring along North Tryon Street. New connecting streets in our growing street grid will ease the pain.

Politicians of both parties smiled for the cameras in July as Charlotte and its state and federal partners broke ground on the long-hoped-for LYNX Blue Line Extension.

Work began almost immediately on extending Charlotte’s first light-rail line 9.3 miles from downtown to UNC Charlotte. Among the first physical signs: the removal of retail buildings at North Tryon and J.W. Clay Boulevard. Among the most recent: construction of retaining walls in front of CMC-University. Tryon Street will be widened and long, gently sloped earthworks installed here between the north- and southbound lanes to carry the tracks over nearby Harris Boulevard.

Get ready for lots of orange barrels soon along North Tryon Street from UNC Charlotte to Old Concord Road, say city engineers, as North Tryon is pushed apart to make room for tracks down the center median. The Charlotte Observer reported in December that some road closings would take place this month as workers install new water and sewer lines. Major work will start in March on bridges, new roadways, traffic signals and retaining walls. Prepare for three years or more of construction on one of Charlotte’s busiest roadways. The city expects the first trains to run in spring 2017.

Construction of our long-awaited final leg of the I-485 outer belt through University City is heading into the home stretch. Despite delays with the I-85 interchange, the state expects to meet its planned completion goal of December 2014, said NC DOT spokesperson Jen Thompson. She told WCNC-TV in December that problems with utilities and delays in getting needed permits “put us a few months behind schedule.” Meanwhile, drivers on I-85 are now seeing major new construction, as crews install the I-485 interchange bridges.

Last summer’s opening of new roadway in the Belgate development added key pieces to the planned urban street grid for University City’s business core. The completion of IKEA Boulevard to McCullough Drive means that cars, pedestrians and cyclists can now travel from University City Boulevard, just west of IKEA, all the way to UNC Charlotte without using North Tryon Street.

The University City Area Plan approved a few years ago calls for creating this grid of streets along both sides of Tryon Street. The goal is to relieve congestion on Tryon and Harris, two of the region’s busiest arteries. Besides extending IKEA Boulevard, Belgate’s developers have also linked IKEA Boulevard to North Tryon Street via Brookside Lane and Shopping Center Boulevard. The recently approved auto mall on the south side of University City Boulevard will further extend IKEA Boulevard and add room for two more connections to Tryon.