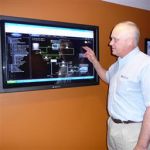 Bowles show you how he tracks that data in real time on a very sophisticated dashboard.

BOWLES CHOSE LONG-VACANT BUILDING TO DEMONSTRATE SAVINGS
The Environmental Way building had been vacant for a decade before Bowles bought it to consolidate his companies. He knew the former IBM location had good bones, so he had an insatiable drive to prove you don’t have to start from scratch to be sustainable. Inside his own learning laboratory, Bowles is now able to show clients of his mechanical and electrical firms how going green won’t break the bank.

MAKING ICE TO KEEP BUILDING COOL
A thermal storage system, for example, makes ice in off-peak hours and stores it to circulate and cool the building during peak hours. Savings are enhanced by an on-grid rooftop photovoltaic system capable of producing excess electrical power that Bowles can sell back to Duke Energy. A number of companies are partnering to produce case studies including Carrier’s i-Vu Energy Management System and a 120-ton Air-Cooled Scroll Chiller as well as Kohler’s Wave Technology toilets and fixtures that produce savings of up to 25% or more per year compared to standard fixtures.

Bowles estimates his electric bill dropped about 72 percent after switching to TOU meter strategies to an average of $1,100 a month as he completed the green makeover. The U.S. Green Building Council pre-certified the building’s core and shell as platinum LEED level, its highest and hardest to achieve rating. Bowles’ office space is gold level.

Environmental Way also is the name of Bowles’ development company, which will spread the gospel of green from offices it shares with his Environmental Services of Charlotte heating and air conditioning firm and EMCI electrical and cabling company.