Campus crime dropped 30 percent between 2010 and 2011, says a new report from UNC Charlotte’s police. University City police also had a 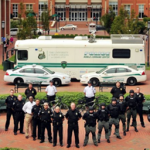 great year, with crime down 13.9 percent – the second best record of CMPD’s 13 divisions.

One drop in particular indicates crime-prevention education is making a dent in bad behavior by foiling would-be crooks. The most preventable crime is something called larceny from auto (LFA). That’s when you leave a laptop, purse or GPS system in plain site in your car, tempting the bad guys. From 2010 to 2011, University City’s larcenies from auto dropped 23 percent. The campus stats are even more dramatic, sliding from 58 instances in 2010 to 26 in 2011. For 2009, the number of larceny from vehicles was 151!

Other items that are worrisome to neighborhoods like residential burglaries tumbled 20 percent. Shoplifting, which you might expect to spike in this economy, dropped 31 percent.

Campus Police cover not only the rapidly growing university campus but also student housing just off campus in their extended territory, where they work alongside CMPD.

The credit for our declining crime rate also goes to the many active community-watch groups, coupled with new tech tools like Twitter alerts and computerized crime tracking.

But most of all it is the men and women on our two police forces who deserve praise. Retired CMPD Captain Jeff Baker now leads campus police. UNC Charlotte grad Captain Freda Lester heads the 96 officers of the University Division.