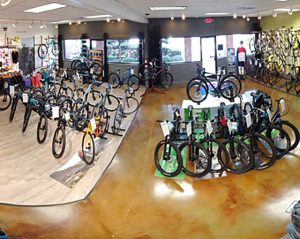 Shane Hockensmith sits at a table in front of his store on Memorial Day and points out the cars with bike racks slowly rolling past. “They’re checking to see if we’re open,” he says.

Giant University City, our community’s only bike shop, is closed to customers this day, but inside, the store’s four employees are assembling recently sold new bikes and repairing others.

In 22 years, the bike shop near UNC Charlotte has never been so busy. “The last six to eight weeks have been a blur,” Hockensmith says.

To keep up, he puts in 65-70 hours a week, much of it at the store with his staff of four, who also work long hours. He hasn’t had time to work out or ride his mountain bike.

And he hasn’t cut his hair since Feb. 1. “My wife says I now look like a bike-store owner,” Hockensmith says, grinning.

Shane Hockensmith – “After” and (inset) “Before” the pandemic.

That time blur for Hockensmith and his staff at Giant University City began in late March as America came face to face with the coronavirus pandemic. Businesses big and small struggled to grasp the new rules of operation.

“The first question was, would we be called an essential business? If not, could we stay open? And how would we pay employees?” Hockensmith says.

North Carolina, like many other states, eventually decided that people do need bikes – even during a pandemic shut-down – for transportation, fitness and recreation while they sheltered at home.

Creating a new way to do business

Answering that first huge question immediately led to many more operational issues that needed answers STAT. Hockensmith called together his team, led by shop manager Mark Yorio, to help him figure it out.

Among the biggest questions: How do we keep open while maintaining the safety of workers and customers? Do we cut hours? Do we limit access? Where do we get disinfectant?

“The first thing Mark did was to go to Lowe’s and get a doorbell,” Hockensmith says. The store would close its front door and limit customers inside the bike showroom to just three at a time.

The team came up with rules for customers to read before entering the now-locked front door: Don’t touch bikes, merchandise or the service counter. Keep at least 6 feet apart.

Team members would greet each person and escort them into the store.

Hockensmith was able to get plenty of hand sanitizer and, eventually, alcohol wipes. Staff were instructed to regular wipe down door handles, counters, merchandise and bicycles.

The rush for bikes – any bikes

The question of store hours soon answered itself, as bike sales exploded. The store now is closed to customers on Mondays and Thursdays while the staff tries to catch up.

Virtually every style and size of bike is in high demand, Hockensmith says. What are the best sellers? “Everything we have,” he says.

The surge in bike sales nationwide and a global shortage of bikes caused by pandemic-driven factory closings in Asia led American buyers wanting specific models to scour the Internet and travel long distances when they found what they were seeking.

More bikes on the way?

The inventory of new bikes at Giant University City is now far below its normal level. Hockensmith hopes that will turn around soon.

As an exclusive dealer for Giant Bicycles, the world’s biggest bicycle company, he recently placed orders for over 200 bikes. Although uncertain when the orders will be fulfilled, he hopes they’ll arrive in “the not too distant future.”

With the slow reopening of North Carolina under way, “We don’t know what’s going to happen in the next 6-8 weeks,” Hockensmith says, “but I’ll still be in business.”