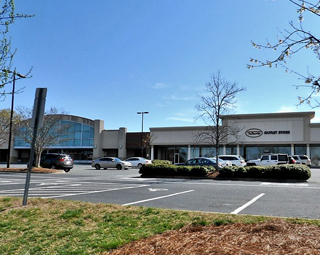 The Pointe will replace two buildings on JM Keynes Dr.

University Place is in line for a major retail makeover. Two buildings that previously housed Old Navy and Talbot’s will be replaced by The Pointe at University Place, a retail hub featuring numerous smaller shops, restaurants and services, the property owner, CASTO, has announced. The new shops will be a short walk from the future JW Clay Boulevard light-rail station on North Tryon Street.

The new retail center at 8930-8944 JM Keynes Drive will have 26,000 square feet of single-story retail and restaurant space, said Shannon Dixon, executive vice president, development and leasing, for CASTO Southeast Realty Service. The center will be finished next summer.

That interest is likely enhanced by construction of the LYNX Blue Line Extension, a 9.3-mile light-rail line scheduled to start operation next summer between uptown Charlotte and UNC Charlotte’s main campus.

The light-rail line encouraged Casto, as well, Dixon said. “With the coming of the light rail, we recognize that the time is right for the redevelopment of Shoppes at University Place,” she said.

University Place began in 1984 as a mixed-use center with shops, offices, a Hilton Hotel, condos and patio homes around the center’s signature 11-acre lake. The center continues to serve as a major attraction in University City and is seen as the likely focal point of transit-oriented urban development along the future LYNX Blue Line Extension.

Along with building the light-rail line, the city of Charlotte is developing plans to upgrade several streets and intersections near future transit stops to make them pedestrian- and bike-friendly, including North Tryon Street and the main public street within University Place, JW Clay Boulevard.

“We are very excited about the road and sidewalk improvements proposed by the City along JW Clay Boulevard,” Dixon said. “The Pointe at University Place will be very pedestrian friendly and have strong interconnectivity with both the transit station and parking garage as well as pedestrian paths over to the hospital and UNC Charlotte.”

For details on this project including leasing opportunities, contact Rich Roy at Casto at 919-467-8880.