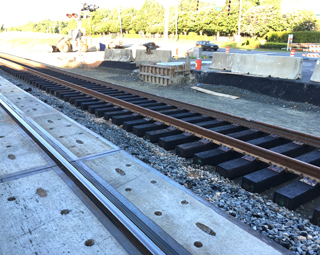 Residents of Back Creek and Newell are halfway through their summer of railroad detours. Work is nearly finished on the 5-week crossing overhaul at McLean and Old Concord roads. Once that crossing reopens in the next few days, the Back Creek Church Road crossing at NC 49 will close for its own makeover.

The McLean Road crossing, which carries about 11,000 vehicles per day, closed on May 16 for reconstruction. The project is taking about 10 days longer than originally projected. The state now expects to have the crossing finished in the next week.

The state plans to begin work on the nearby Back Creek Church Road crossing soon after finishing the McLean Road crossing. This project should take about 30 days to complete, as well.

Both crossings are key paths to UNC Charlotte and the central University City business area for thousands of residents living in neighborhoods just south of the railroad tracks.

The crossings are being rebuilt to accommodate a second set of railroad tracks on the heavily used NC Railroad corridor. Thanks to $546.5 million in federal stimulus money from the 2008 recession, North Carolina is updating is main rail line to allow faster speeds and full passenger-train service without delays.

The second set of tracks is essential for reliable passenger service. Currently, passenger trains must pull onto sidings to let freight trains pass. That means that a simple trip to Raleigh, for instance, can take an extra hour or more.

The state will also add two passenger train round trips between Charlotte and Raleigh, making a total of five trips per day.

Improvements in the Charlotte area

In the Charlotte area, the project is adding a second set of tracks, smoothing several curves and closing, rebuilding or replacing several crossings. The state is finishing construction of the new Grier Road bridge over the tracks to replace the Newell-Hickory Grove Road crossing that closed in April.

The state has also been talking with Harrisburg to build a passenger train depot there.