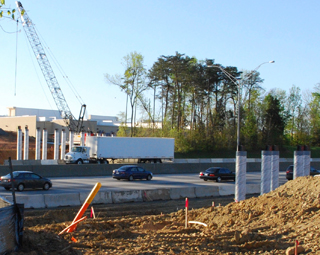 Bridge under construction between Belgate shopping center and Innovation Park

We have good news regarding two future bridges across I-85! Construction of the I-85 South Bridge between the Belgate shopping center (IKEA et al) and Innovation Park is on schedule. The bridge could open to traffic late this year. Meanwhile, Charlotte City Council has added construction of the I-85 North Bridge to the bond package going before voters in November.

In June, the City Council voted to shift $12,480,000 for the I-85 North Bridge from the planned 2018 bond to this November’s bond vote, said Bill Parks, the city’s capital budget manager. Federal/state funding for the project will total $7.4 million and will be budgeted in fiscal federal year 2017, which starts October 2016, Parks said.

Both bridges are part of a city plan to improve connectivity to the future LYNX Blue Line Extension. The light-rail line is under construction and is expected to begin service between Uptown Charlotte and UNC Charlotte in August 2017.

Parks said there were several reasons why the city staff decided to ask to fund the I-85 North Bridge this fall:

While the I-85 South Bridge is expected to open just 2 years after voters OK’d bonds to build it, the I-85 North Bridge may not open to traffic for five years, assuming voters approve the funding this fall. Parks said the extra time will be needed to design and construct a more complicated bridge and roadway system than needed for the I-85 South Bridge – including two separate bridge sections and relocation of a transmission tower.

The following websites have additional information about the project: