The city of Charlotte sent a photographer aloft on June 7 to capture the progress along the 9.3-mile LYNX Blue Line Extension, under construction from uptown Charlotte to University City. The stunningly sharp photos offer great detail both of the transit line’s progress and projects under way or announced near the future light-rail stations. We have created this slide show of key spots from where the line enters the North Tryon Street median at Old Concord Road to its terminus on the UNC Charlotte campus.

CLICK HERE to learn more about the LYNX Blue Line Extension, set to open in August 2017.

DOUBLE-CLICK ON ANY PHOTO TO SEE IT IN LARGE FORMAT 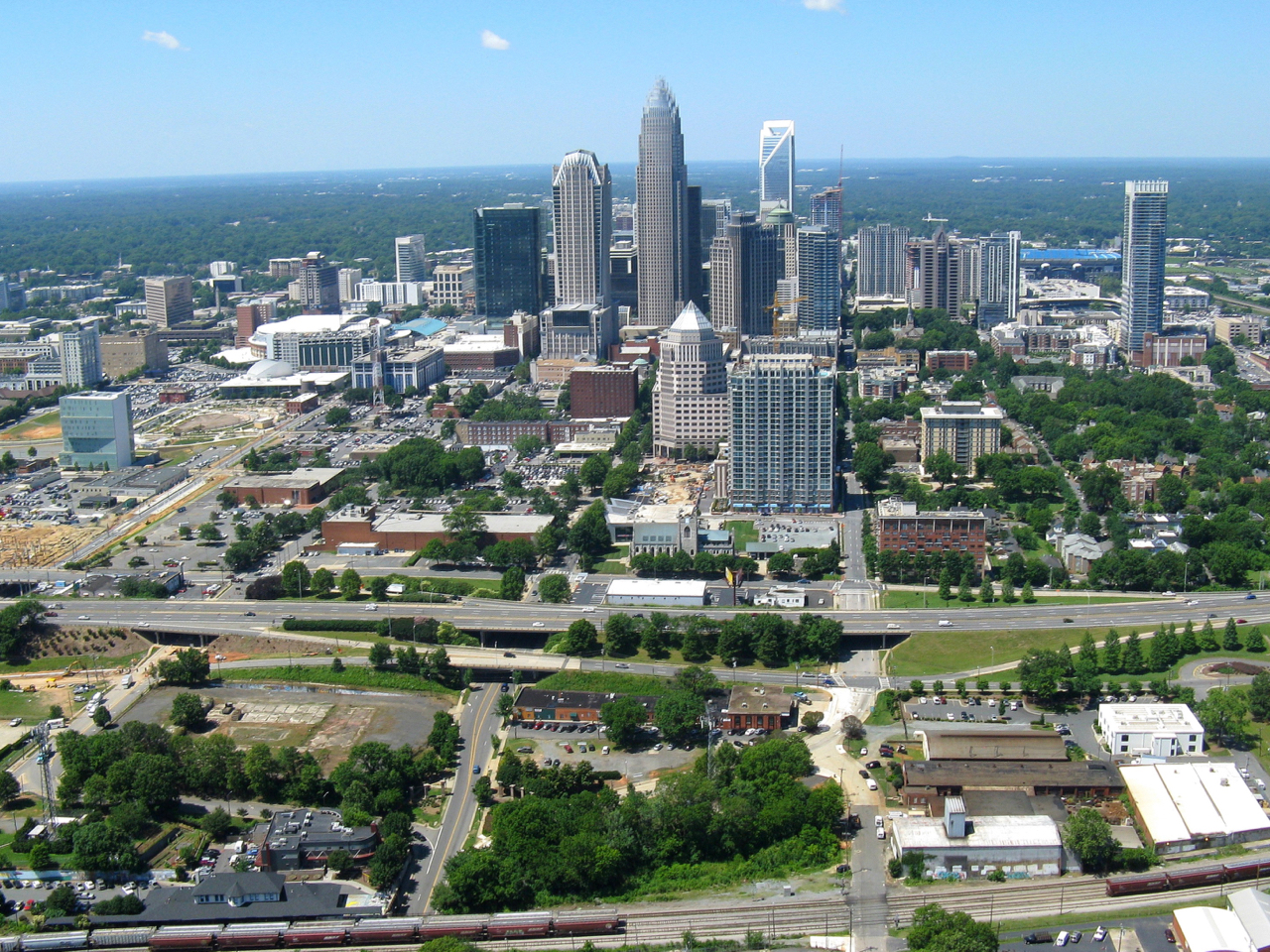 The LYNX Blue Line Extension will begin at the current uptown terminus of the existing LYNX Blue Line, the Seventh Street Station. The BLE Extension path can be seen on the center-left side of the photo as it runs by the UNC Charlotte Center City building (blue structure on the left edge of the photo).

The LYNX line follows an old rail corridor northeast out of center city, past the rail yard and through the NoDa community around 36th and North Davidson Streets. Crescent NoDa, a 344-unit apartment community, is under construction to the left of the future NoDa transit station where the track makes a gentle bend.

The LYNX line moves from the rail corridor to the North Tryon Street median at Old Concord Road, just north of Eastway Drive and the old North Park Mall (left side of photo). The transit station is in the middle of the photo, and a park-and-ride lot is under construction to the left.

I-85 connector to North Tryon Street

The LYNX line enters the University City MSD at the I-85 connector to North Tryon Street (across the upper portion of the photo). Carolina States Regional Center has begun work on a 375-unit apartment community (the cleared land in the center of the photo) and has received a rezoning to create a mixed-use community on the far side of the I-85 connector. In the distance is iconic IKEA and the Belgate shopping center. To its left, University City Boulevard connects to I-85. The high-voltage power lines mark the southeast boundary of The Arden Group’s future University City auto mall.

Just north of University City Boulevard, the photo captures the Walmart Supercenter at the intersection of North Tryon Street and University Pointe Boulevard. Above the Walmart is the Belgate center and IKEA Boulevard, where a Holiday Inn Express is under construction. At the top center of the photo, Davis Development is building the Sovereign at Belgate Apartments, with homes as large as 1,491 sf. By the way, University Pointe Boulevard is being extended across I-85 to Innovation Park. The bridge is to be finished late this year.

Allstate Insurance occupied the building in the center of this photo for many years but recently relocated across I-85 to Innovation Park (the former IBM facility on the left upper edge of the photo). The 197,000 sf office building and 32-acre site at 401 McCullough Drive are available to lease. Contact Joe Franco at Cushman & Wakefield. In the foreground is the Sovereign at Belgate Apartments. In the top right of the photo is University Place, and, above that, the TIAA complex.

The McCullough Drive Transit Station occupies the North Tryon Street median just north of the McCullough Drive intersection. To the left is University Executive Park, a 13-building office and medical park that recently underwent $4 million in updates. Verbatim recently announced that it is moving from its longtime home on West W.T. Harris Boulevard to University Executive Park. Its new home is the three-story building facing North Tryon Street.

The LYNX line rises over the W.T. Harris Boulevard intersection and past University Place. This mid-80s mixed-use development ushered in the first building boom in University City. Planners and property owners now hope to create a true urban heart to University City around the 11-acre lake. Notable features include Carolinas HealthCare System University, at the bottom left corner, and JW Clay Boulevard, the road sweeping around the back of the lake. The city plans to create another bridge over I-85 and link University Research Park to University Place. Funding is included in the planned 2016 city bond package.

The JW Clay Boulevard Parking Deck and Station are nearing completion. The hospital property is at the bottom left corner. The UNC Charlotte campus starts at the bottom right. Both owners have partnered with Charlotte and North Carolina to extend the pedestrian bridge, which now ends at the station, across the northbound lanes of North Tryon Street. The master plan for UNC Charlotte envisions a conference center and hotel in this area of campus. Meanwhile, the hospital, university, University City Partners and four owners of retail property have begun a master plan for this area’s future life as an urban center.

View from Campus to Center City

This stunning photo captures the heart of University City and the towers of Center City. In the center of the photo is the JW Clay Boulevard Station and parking deck. In the left foreground is the Charlotte Research Institute, part of UNC Charlotte. Beyond that is the hospital campus. Across North Tryon Street is University Place. Notice the concrete path in the middle of North Tryon Street at the bottom of the photo. This will carry the LYNX tracks into a tunnel and under North Tryon Street to campus.

The LYNX train bed emerges from the tunnel and swings onto campus. The line will end beside student housing on Cameron Boulevard after traveling over a protected wetlands. Charlotte Research Institute is to the top left. Mallard Pointe, a popular retail destination, is across North Tryon Street at the CRI entrance.