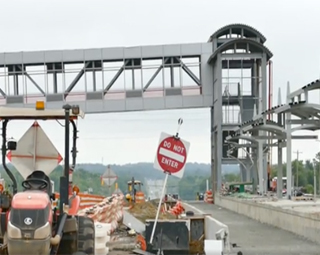 New bridge will mirror this one to parking deck

Work has begun on a pedestrian bridge between the future JW Clay Boulevard transit station and the UNC Charlotte campus. The $3.7 million project will include a structure with stairs on the southeast side of North Tryon Street and the walkway across the northbound traffic lanes to an existing tower at the future light-rail station. The new pedestrian bridge is scheduled for completion in early 2017.

The station already has an elevated walkway linking it to the Clay Boulevard parking deck on the northwest side of Tryon Street.

Funding for the new pedestrian bridge is being provided by Charlotte, North Carolina, UNC Charlotte and Carolinas HealthCare System.

Both spans also will get large murals proclaiming “University City” to motorists passing underneath. University City Partners and UNC Charlotte are paying for the murals.

Several transit stations are being built in the North Tryon Street median between Old Concord Road and JW Clay Boulevard. Riders will be able to reach the stations via traffic signals and crosswalks. However, the two stations located next to parking decks, at Clay Boulevard and University City Boulevard, have pedestrian bridges due to the large volume of people expected to park at the decks and board the trains.

“The bridge (between campus and the Clay Boulevard station) allows pedestrians to safely cross over North Tryon Street to access the Blue Line station without any impact from vehicle traffic,” explained Deborah Clark, a spokesperson for the Charlotte Area Transit System.

The Carolinas HealthCare System University expects many patients, visitors and employees to use the light-rail line to reach the hospital and its many outpatient services.

The master plan for UNC Charlotte envisions a hotel and conference center being built near the Clay Boulevard transit station, which adjoins the university’s Charlotte Research Institute. The station is also close to Jerry Richardson Stadium.

If you haven’t driven North Tryon Street recently, this brief video posted on May 20 by The Charlotte Observer will catch you up on the progress. VIEW VIDEO