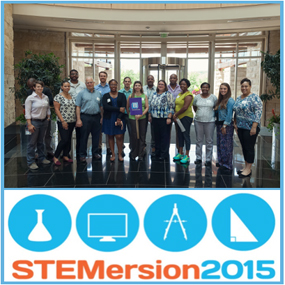 Math, science and technology teachers recently visited TIAA-CREF’s campus to learn how classroom success can translate into good careers. The STEMersion event gave teachers both valuable insights and cause to shed tears of joy, as TIAA-CREF employees offered heartfelt thanks.

“When we saw the video where they were thanking teachers, that struck a chord with everyone!” said Olympic High teacher Nakeesha Dawson.

Dawson and about 50 other middle- and high-school teachers spent two weeks visiting area businesses through Charlotte-Mecklenburg Schools’ STEMersion program. Business partners showed teachers the work environment and the practical use of formulas, theories and concepts taught in the classroom. Teachers receive a stipend and renewal credits.

The STEMersion program attracts some very dedicated teachers. Dawson, for instance, oversees the Career and Technical Education program at Olympic High. She’s also finishing a doctorate at Appalachian State University, raising a family and commuting – for just one more month – from Winston-Salem, where she previously worked. Even so, she said she was excited to take part in STEMersion.

“Being new to Charlotte, I wanted to see the opportunities that are out there. There are so many people who can show our kids that there are so many avenues (for careers) if you want to take it,” Dawson said.

The theme for the afternoon tour was TIAA-CREF’s Digital Transformation. The company that steel magnate Andrew Carnegie founded a century ago to handle pensions for professors has grown into a global asset manager dedicated to helping institutions and individuals achieve their investment goals. At Charlotte’s facility, several thousand employees handle tasks ranging from fielding customer service calls to maintaining a data center.

A brief presentation during lunch primed the teachers for what they were about to see and hear on their tours. Though technology has been important to TIAA-CREF for many years, teachers were told, the company is undergoing a digital transformation to help employees deliver services better, faster and cheaper.

The customer is the ultimate decision maker in the digital age. To succeed, TIAA-CREF must launch new ideas quickly, be able to measure everything and listen to feedback.

Each stop on the tour reinforced that message, as small groups of teachers took turns visiting the expansive customer call center, the electronics- and security-camera filled data center, the dimly lit network-monitoring center called, aptly, “the cave”, and the facility’s Operations Command Center – strikingly similar to those TV images of Mission Control for a NASA moon mission.

In the middle of the call center, teachers gathered around a cluster of massive monitors filled with frequently changing numbers and graphics – the visual signs of how well several hundred employees were doing in answering customers’ calls quickly, efficiently and effectively. Having that data means that supervisors can learn quickly when problems arise and respond, like they did that morning.

“We got hit hard this morning” by a flood of calls, a staff member told the group, “but we are catching up.”

At each stop at TIAA-CREF, presenters explained the types of training people needed to get hired and the many opportunities to learn on the job and grow professionally over the years. The event ended with a team-building exercise and a short video featuring local employees thanking the teachers for their service to the community.

Dawson, who will soon finish her doctorate in educational leadership, was particularly struck by how well employees are treated at TIAA-CREF and at other companies on the STEMersion tour.

“One of the things I took from TIAA-CREF and a lot of the other businesses was that when you treat your employees with respect, and you respect their services, they stay with you,” Dawson said. “I heard that a lot from employees: ‘I like where I work.’ And you see that culture is very strong.”

Dawson said she plans to tell her students, “You don’t have to settle for your job, because there are businesses that will value you if you have skills.”