Mallard Creek Greenway detour is set to open in August 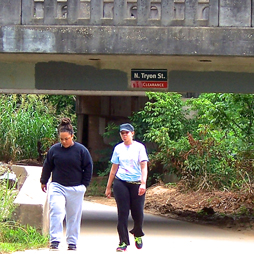 If you like traveling Mallard Creek Greenway between UNC Charlotte and University Research Park, we have good news. The state plans to have a detour path ready in mid-August when it closes the greenway for two years to replace North Tryon Street’s bridges.

One disappointment: Design challenges have delayed a hoped-for second detour path – Barton Creek Greenway to University Place and UNC Charlotte. As a result, we may face several months in late 2015 without a greenway alternative.

State’s plan for bridges and greenway

State engineer Ron Graham says that state will close the greenway under North Tryon Street and open a temporary detour path in August when it closes the highway’s southbound lanes for construction. Southbound traffic will be detoured onto other roads. The greenway detour path will run up a gravel access road to North Tryon Street and onto a temporary paved path along the edge of the closed southbound lanes to Mallard Creek Church Road. People using the detour path will cross Mallard Creek Church Road and North Tryon Street via existing pedestrian crossing signals. An existing sidewalk will then lead them to the Kirk Farm Fields Park and the start of Mallard Creek Greenway. A short walk back up the greenway will get people to the Toby Creek Greenway bridge and access to UNC Charlotte.

Phase II will mean several months with no detour

Unfortunately, this plan only works for half of the two-year construction project. Once the state reopens the southbound bridge next May and reroutes northbound traffic onto the new bridge, the state must close the temporary greenway detour path, Graham says. The original timetable for Barton Creek Greenway called for it to open in time for the shift.

Gwen Cook, Mecklenburg County’s greenway planner, said that Barton Creek has proven to be a much more difficult engineering challenge than they had expected, with both a steep grade change and a lot of rock to work around. Cook said that construction is now scheduled to start next spring, with completion in late 2015.

Ironically, the state may have helped delay Barton Creek Greenway but also has made it possible in the first place. Barton Creek Greenway has been planned for many years but, until now, lacked funding. Cook said that because the state will cover 80% of the cost, NC engineers also must OK all plans, adding time to the review process. On the other hand, that 80% of funding translates into about $920,000 of a $1.15 million total cost. “We’re delighted to have them as participants,” Cook said.