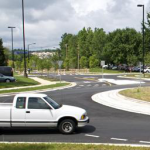 I rode from Kohl’s to IKEA the other day without using Tryon Street or I-85. Travel through our “downtown” on back streets? I’ll bet YOU have never done it. But you will. With all the Tryon-Harris traffic congestion – and more coming when light-rail construction starts – we’ll all soon appreciate our growing network of Tryon Street alternatives.

WHAT IS THIS GRID?

The plan for a network of streets in the University City business district between I-85 and University City Boulevard dates back several years. It is a major part of the University City Area Plan, a public land-use guide created by University City Partners and adopted by Charlotte to encourage transit-oriented development near the future Blue Line Extension. The grid is intended to maximize development on both sides of Tryon east of the I-85 exit while helping people move easily through the district, whether by transit, car, bike or foot.

The grid starts with existing streets including McCullough Drive, University Executive Park Drive and JW Clay Boulevard (through University Place). The grid plan proposes extending several streets and creating new ones, such as two interchange-free roads over I-85 to University Research Park.

Developers have begun adding sections of the grid. You can find parts at Grande Promenade I and II (including a traffic circle at Ken Hoffman Drive), Belgate (around the IKEA store), the Tryon Street Walmart and Charlotte Research Institute (UNC Charlotte’s public-private research facilities along North Tryon).

The owners of the Mallard Pointe (Kohl’s) Shopping Center partnered with UNC Charlotte in 2009 to build a key network link – the first signalized campus entrance on North Tryon Street.

Though far from complete, our grid has begun to take traffic pressure off of Tryon Street. I got my first taste of the power of the grid last winter when I pulled off I-85 at University City Boulevard and saw, in the distance, the wall of brake lights that signaled a big wreck at North Tryon. Ugh!

Then I remembered I could dodge it via some new back streets. I hung a left onto IKEA Boulevard, a right at Brookside Lane, a left into Walmart and a right onto University Pointe Boulevard (which serves as the Tryon Street entrance to Walmart). There I was, happily looking at a green light and no backup onto Tryon.

The grid becomes exponentially better this summer, thanks to Belgate developer DDR, when a new piece of IKEA Boulevard comes on line. The extension runs from where the street currently ends at recently extended University Pointe Boulevard to a new traffic circle on McCullough Drive (pictured above).

The finished roadway awaits a traffic signal at IKEA and University Point boulevards before it can open to cars. You can bike it, however, like I did on a recent Sunday. I marveled at the bike lanes, promising shade trees, broad sidewalks and, of course, fresh roadway that soon will let me get from my lakeside condo at University Place all the way to University City Boulevard near IKEA without cursing the rush-hour mob on Tryon.

Another article in the July 9 newsletter talks about the coming light-rail line, the Blue Line Extension. In about two years, construction of the rail line down the North Tryon median will create daily rush-hour snarls. How will we cope? One way will be to make use of our growing grid.
And for people like me who’ll work, shop and live there, another will be to walk and bike more!