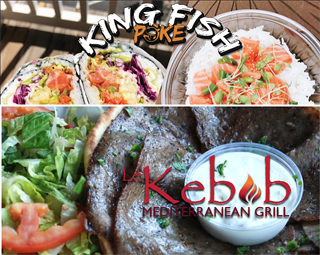 King Fish Poke and Le Kabab Grill both scored No. 1 rankings this fall from local media. Coincidentally, the two restaurants are neighbors at 350 McCullough Drive in the McCullough Commons center at North Tryon Street and East W.T. Harris Blvd.

WCNC says that King Fish Poke is No. 1 among “Charlotte’s 4 favorite spots to find affordable Japanese eats.” Another University City restaurant, Hanaya Garden, is No. 4. MORE

Not a Panthers fan? You’ll find plenty of Chicago Bears buddies at the Wild Wing Café – University and the Dallas Cowboys crazies at the Mallard Creek Hickory Tavern, says charlottefive.com in its new list of “best spots to watch NFL games in Charlotte, no matter which team you support.”

Peno Mediterranean Grill – Peno is new to University City and Charlotte but already a hit in its hometown of Wilmington. In The Arbors at 2115 E. Arbors Dr. MORE

Seafood Connection – Most new restaurants struggle to bring in a crowd and establish their reputation. Not so with Seafood Connection. 630 University City Blvd. near McCullough Drive and West W.T. Harris Blvd. MORE

Wrapway Mediterranean wraps and more – Two techies from Turkey came to America to pursue their careers, met and discovered they shared a love their native food. Their restaurant is getting great reviews on Yelp. Learn more in this article by The Observer. 10221 University City Blvd. at Pavilion Boulevard. MORE