Brew pub is under construction at University Place 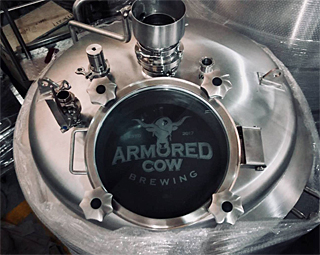 Renovations began in early September on 11,000 sf of space in the retail building at 8821 JW Clay Blvd., near the Guitar Center store.

Few craft breweries nationwide offer a full selection gluten-free beer, which is brewed from grains such as millet, rice, quinoa and buckwheat rather than wheat. Kalinoski said that Armored Cow will also offer a limited selection of traditional wheat-based beers.

“Nothing like a beautiful brew day to pilot batch a gorgeous GF Amber Ale and Imperial IPA with some millet, dark malted rice, quinoa and buckwheat to make this Sunday Great!” reads a recent post on Armored Cow’s Facebook page.

Local architectural firm Redline Design Group, which has done four other adaptive reuse projects for breweries, created the design for Armored Cow brewery. The facility will include a taproom, brewing area and patio.