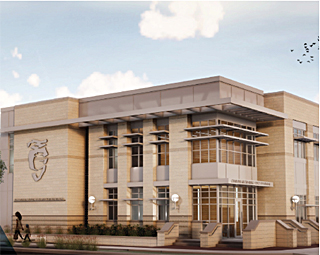 The Charlotte-Mecklenburg Police Department hopes to replace the division’s leased station at University Executive Park with a two-story city-owned structure on North Tryon Street near the McCullough LYNX Station.

Special requirements for parking, security and other issues will require the City Council’s approval of a zoning change for the proposed site.

Details in the site plan and a building rendering show the building’s main entrance at the corner of North Tryon Street and Ken Hoffman Drive, with two stories of windows clustered near the main entrance.

Drawings on the site plan show the main police station building, accessory structures and 8-foot-tall fencing running the length of both North Tryon Street and Ken Hoffman Drive. The fencing would screen about 130 surface parking spaces.

Why a rezoning is needed

The CMPD requests that the city council rezone the property and adjoining fire-station property for Transit-Oriented Development (TOD) zoning for Mixed Uses, with several conditions that the CMPD says it needs for the police station. Among the conditions:

No date has been set for the public hearing.