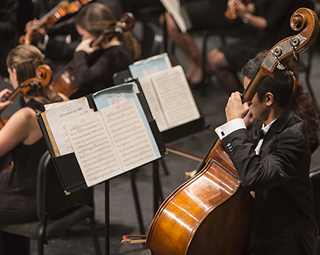 The Chamber Orchestra will perform a Symphony of Diversity concert.

If you enjoy live music, you will LOVE the next few days in University City.

We just learned that Thursday’s rain-postponed free performance of The Voltage Brothers at The Shoppes at University Place has been shifted to May 3.

An enthusiastic crowd packs the University Place lakefront on April 19 for Too Much Sylvia.

The Voltage Brothers will appear lakeside near the main bridge at the University Place lake. Is there a better place to enjoy music outdoors on a beautiful spring evening?

All campus performances will take place in Belk Theater at Robinson Hall. This an acoustic gem of a hall, with great seats throughout.

The Jazz Ensemble will offer works by Cole Porter, Billy Strayhorn and others.

The Chamber Orchestra will celebrate the many voices of the Americas in its second “Symphony of Diversity” concert.

The Wind Ensemble will perform on April 30 at Robinson Hall.

The Voltage Brothers will perform for free, courtesy of the many shops and restaurants at The Shoppes at University Place.

Chamber Orchestra – 7:30 pm April 27 in Belk Theater at Robinson Hall. The UNC Charlotte Chamber Orchestra, led by Jonathan Govias, celebrates the many voices of the Americas in its second “Symphony of Diversity” concert. More than half of the repertoire is by women composers, including the rarely-heard Piano Concerto by Clara Schumann, and the American premiere of a new work by a leading composer. Learn more

Men’s and Women’s Choruses – 7:30 pm April 28 in Belk Theater at Robinson Hall. The choruses, open to all university students, will perform a range of popular and classical styles.

Wind Ensemble – 7:30 pm April 30 in Belk Theater at Robinson Hall. “Angels and Demons” is the title of this program by the UNC Charlotte Wind Ensemble, performed under the direction of Dr. Shawn Smith. Learn more

The Voltage Brothers will perform at The Shoppes at University Place

Jazz Ensemble – 7:30 pm May 1 in Belk Theater at Robinson Hall. The Jazz Ensemble performs an evening of jazz standards and big band arrangements under the direction of Dr. Will Campbell. The program includes music by Cole Porter, Thad Jones, Joe Henderson, Billy Strayhorn, and more. See the full program.

The Voltage Brothers – 6-9 pm May 3 on the lake at the Shoppes at University Place. The concert is free. Come early to shop and/or dine, with dozens of stores and restaurants nearby! Learn more