Businesses get glimpse of urban future at networking event 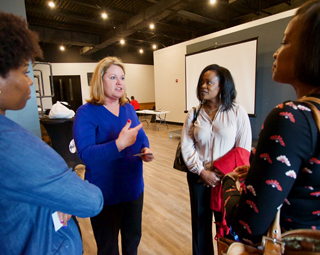 On March 20, just a short walk from the brand-new University City Blvd LYNX light-rail station, small-business leaders networked, celebrated the long-awaited opening of LYNX service and discussed plans to use light rail as an engine for change.

“University City is on a growth trajectory. We saw just crazy ridership this weekend, especially on Saturday, and we are thrilled,” University City Partners Executive Director Darlene Heater told the group as she welcomed them to the networking event. “It has been a long road for our businesses and our community, and we are glad that the construction barrels are gone.”

University City Partners organized Tuesday’s networking event at the Camino Community Center to start an ongoing conversation among area businesses about ways to share information and lobby effectively for improvements needed to fulfill the vision of an urban center near UNC Charlotte.

New police station in the works

Rutledge said that CMPD has purchased land for a new police station on North Tryon Street to replace the current offices on McCullough Drive in University Executive Park. The city plans to build a 15,000-square-foot facility and hopes to have it open within two years, he said.
Meanwhile, crime is down 8% over last year, year to date, he said, with violent crime down 25% and property crime down 7%. “That’s a pretty good start, and we will keep working at it,” he said.

Rogers invited business leaders to join University City Connect, the public-private group helping public schools in the University City market area.
The upcoming Race2Educate 5K and Fun Run on April 14, now in its fifth year, has raised over $130,000 for scholarships to children in elementary school through high school.
All proceeds raised by the annual event go to help students and schools, Rogers said. “if you love kids and you want to help change the trajectory of kids in and around the University city area, I want to talk with you,” he said.

Heater then gave a fast-paced overview of the changes sweeping through University City, fueled in part by more than $2 billion in public investments in light rail and UNC Charlotte expansion, as well as rapid expansion by major University Research Park businesses.

University City Partners, a public-private group, was formed a decade ago to lobby public and private entities for resources needed to support a strong university and business district, including extension of light-rail service and completion of the I-485 outer belt.

Heater shared plans created by major stakeholders with help from University City Partners to redevelop University Place and nearby retail properties into a city center.

She also talked about several projects that could spark even more change, including the proposed entertainment district near University City Blvd Station, a mid-rise luxury apartment building about to break ground near the McCullough Station, and the potential for greatly expanded medical services on the 40 acres of undeveloped land owned by Carolinas HealthCare System University.

“We have a lot of aging infrastructure, but we are starting a re-genesis,” Heater said. “Light rail gives us an amazing opportunity to develop and redevelop in a new way.

“We are working with developers to make sure we are not building more of what we have today but that we are building what we want for the future.”

Additional public investment is also critical to achieving a livable urban center she said, including an urban park near the LYNX line, a new and bigger regional library, and a much more urban street grid.

“If we don’t get these pieces in place today, the quality of development for decades to come will be less than we want,” she said.

Heater issued an invitation to the people at Tuesday’s networking event to help in building that new future.

“The future is ours to determine what happens here, and everyone’s voice matters,” she said, “so when I reach out to you to advocate to our elected officials and city and county staff what our true need is and the importance of it, I hope you use your voices.”

At least two more networking meetings in the works

Denise Coleman, right, of Norsan Media, talks with a participant at the March 20 networking event.

The March 20 event is the first of three monthly networking events planned by University City Partners.

If businesses find that the networking and information sessions are helpful, UCP will keep them going, Heater said.