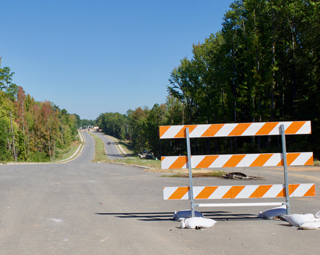 A new stretch of Mallard Creek Road near the future intersection with University City Boulevard.

The widened and realigned stretch of Mallard Creek Road under construction between West W.T. Harris Boulevard and North Graham Street should be substantially completed and open to traffic in 2019, a spokesman for the NC Department of Transportation told about 50 people attending a road-project update meeting on Oct. 24.

That opening date for traffic is later than the previously announced date of late 2018, transportation department spokesman Warren Cooksey said. The extra time is needed to resolve two issues involving utility lines, he said. Weather conditions this winter and next will also determine the final opening date, he added.

The meeting at Derita Presbyterian Church is the fourth one organized by the Derita Statesville Road Community Organization and the state transportation department since 2016 to keep area residents and businesses informed of progress on the lengthy road project that began in early 2014. The state has also worked with the organization to provide regular newsletter updates.

The state suspended work on the project from September 2015 to December 2016 due to problems identifying and relocating numerous utility lines at two key intersections: Graham Street at Sugar Creek Road and Mallard Creek Road at Harris Boulevard.

Road construction resumed in early 2017 after the utilities completed their relocation work.

Reviewing the project’s history for the audience, Cooksey said that while the relocation of utility lines is a major effort for most state road projects, the complexity of that work on this project “transcended anybody’s experience.”

Problems with utility lines continue: The latest delays involve finding yet another previously unidentified utility line that must be relocated near Harris Boulevard and discovering that a gas line already relocated by Piedmont Natural Gas must be moved again, Cooksey said.

Progress since work has resumed

The existing two-lane stretch of Mallard Creek Road is being raised and widened to four lanes plus a median, curbs, gutters and sidewalks.

Cooksey reviewed how the state will handle traffic flow as the contractor rebuilds several existing intersections. For instance, work on a future traffic signal at Hubbard and Mallard Creek roads will start once the traffic-signal work is completed at Sugar Creek Road and Graham Street, Cooksey said.

That signalized intersection will be replaced by a new one nearby at Baucom Road, along with a new connector road (an extension of Baucom Road) between Mallard Creek Road and IBM Drive.

One key intersection is where a newly completed addition to University City Boulevard will eventually join with the new alignment of Mallard Creek Church Road – much of which has been completed, as well.

Cooksey said that the state plans to complete that intersection next year and open it to traffic well before the final project is finished.

The Derita Statesville Road Community Organization sends out periodic e-newsletters with updates on the Mallard Creek Road project as well as other community news. To receive a free newsletter, send your request to deritanews@gmail.com.