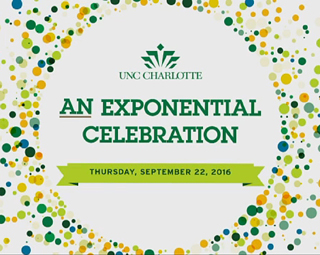 “Today we are celebrating the university’s dramatic trajectory of growth,” declared Exponential Campaign Chair Gene Johnson. “This has set the stage for more and more students to change their lives and their communities with a UNC Charlotte education.”

EXPONENTIAL: The Campaign for UNC Charlotte, is the largest capital campaign in UNC Charlotte’s history and has significant implications for the institution’s future, said Johnson, Class of 1973.

The campaign’s theme “EXPONENTIAL” asserts the accelerating force that UNC Charlotte has on the lives of its students, on its educational and economic partners, and on the region and beyond. The theme also conveys the University’s remarkable trajectory of growth and innovation, especially during the last decade, and its strategic vision for sustained strategic progress and impact.

“As we embark on EXPONENTIAL: The Campaign for UNC Charlotte, I must remind you how far we’ve come,” said Chancellor Philip L. Dubois. “Over recent decades, we’ve rapidly expanded enrollments, faculty and programs.”

Building for the future

The $200 million will provide:

“We hope we will see a truly exponential impact from the giving,” Johnson said.

Johnson said that lead gifts by key alumni and businesses sends an important message to alumni and other supporters. “We are at a transformative juncture in the life of this University,” he said. “One important milestone was when we achieved doctorate status and became a major research university. Now, we are moving more into shifting the financial burden away from students. This campaign will help us do that.”

The “exponential announcement” was a highlight of a weeklong Founders Celebration to commemorate UNC Charlotte’s 70 years of creating opportunity. The University is one of several institutions founded in metropolitan areas of the United States immediately after World War II in response to rising educational demands generated by the war and its technology.

“Now UNC Charlotte is a leading urban research university with national and global scope,” Dubois said. “Our needs have changed as much as our campus. We have ambitious goals, but we’ve accomplished great things before. To continue direct and meaningful impact, we need past and future donors to participate. An investment in knowledge certainly pays the best interest.

“This campaign undoubtedly will bring exponential returns, serving the interests of students, faculty and staff at UNC Charlotte as well as many industries and residents of the region,” he said. “We appreciate your continued trust and generous support.”

The donation was announced at the University’s Student Union, which is being named the Karen A. Popp and Demond T. Martin Student Union. The two alumni were honored at Thursday’s campaign launch for their many years of service and substantial financial donations to the Exponential campaign. Completed in 2009, the $65 million facility has become the epicenter of the campus, hosting more than 300 student organizations.

Johnson, the first alumnus to serve as chair of the UNC Charlotte Board of Trustees, said there is an important change in the makeup of the University, which is indicated in the direction of the capital campaign.

“For the first time, we will have significant numbers of alumni participating in a major capital campaign,” he said. “This says a lot about what we are as a University and how we are growing.

“It’s incredible to think this University is now 70 years old,” Johnson said. “And it’s a key year in our life as an institution. That’s why the theme of the campaign is so important. We will be experiencing exponential growth from here on out. This campaign will also have an exponential impact on the region and on the lives of our students.”

Tim Belk and Leon and Sandra Levine are the honorary co-chairs for Exponential: The Campaign for UNC Charlotte.

You can give, too

Learn more about the campaign and ways you can support it at http://exponential.uncc.edu/