Take our survey, and help shape the future 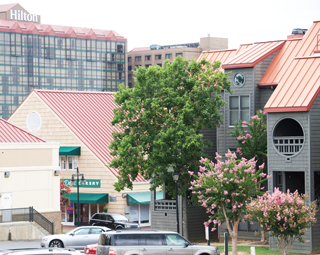 Ever wish you could influence the future? Here’s your chance. Stores coming down at University Place signal big changes ahead for North Tryon Street. University City Partners and several property owners are exploring whether a transit-powered urban center is feasible near the future Clay Boulevard light-rail station.

What must they build for you to come? TAKE OUR SURVEY, and let them know.

How we’ll use your responses

University City Partners and its businesses are working on a feasibility study and development plan for the area within a 10-minute walk of the station – ground zero for transit-oriented development in most parts of the country. The feasibility study seeks to understand what consumers want now and in the near future – a key part of the survey’s questions.

This is a detailed follow-up to previous non-binding plans initiated by University City Partners and approved by the city of Charlotte that create a vision for future development within a quarter mile of the stations at Clay Boulevard, McCullough Drive and University City Boulevard.

The city’s 2015 Transit Station Area Plans Update identifies University Place as “University City’s town center” of the future – “the hub of economic, entertainment and community activity within University City.” The city plan envisions University Place’s retail streets such as J.M. Keynes Drive being lined with multi-story, multi-use buildings with street-level shopping and dining, parking tucked out of view and safe ways for pedestrians and cyclists to move easily throughout the community.

While the public had several opportunities to offer ideas for these plans, the new one under development for the Clay Boulevard Station is being created by property owners that might eventually fund redevelopment. Among the participants are the two primary owners of University Place, Cambridge Properties (the Kohl’s shopping center), UNC Charlotte’s Foundation (owners of 12 acres at the Clay Blvd Station) and Carolinas HealthCare System (owner of the hospital campus that runs from W.T. Harris Boulevard to the Clay Blvd station.

Redevelopment around the Clay Boulevard station is not just speculation; it is under way. Beginning in August 2017, the LYNX Blue Line Extension will begin service between UNC Charlotte and uptown Charlotte. Casto, owner of the Shoppes at University Place, recently announced a new retail area, The Pointe, within a few yards of the Clay Boulevard station and parking deck.

The old retail buildings being razed at University Place will make room over the next year for a new kind of retail, one focused both on the customers who arrive by car or by transit to dine, shop and use services here, and the 32,000 people who work and study at UNC Charlotte.

Meanwhile, the city of Charlotte is completing an 800-space parking deck that will have up to 10,000 square feet of shops and similar uses directly across North Tryon Street from the station and directly across JW Clay Boulevard from The Pointe.

Don Casto, partner in the Columbus, Ohio-based company that owns the Shoppes at University Place and dozens of other centers across the Midwest and Southeast, spoke last year to a commercial-real-estate magazine about trends for open-air shopping centers like University Place.

But how might a light-rail transit line next to a major urban university influence that vision?

How can private businesses profit from the changes envisioned in Charlotte’s development plans for North Tryon Street’s transit stations, such as transforming the current car-centric shopping centers to walkable urban villages that blend a variety of uses?

What is the best timetable for phasing in specific private development and public investment such as new streets, green space and a library?

How can private developers, the university and hospital work together for maximum mutual benefit?

Trailblazing effort will benefit greatly from your opinions

There are very few examples nationwide to draw upon. Tobe Holmes, who oversees planning initiatives at University City Partners, says that a significant step in creating this new owner-driven-plan is to conduct a thorough market analysis of residential, retail and office needs.

“If we don’t know what to expect, we can’t get realistic about what we can build there,” he says.

That is where you and the survey are crucial to what happens around the Clay Boulevard transit station and, most likely, near the McCullough Drive and University City Boulevard stations.

Don’t miss your opportunity to shape the future. Click on the link and take the survey. Ten minutes now could change our future for decades to come.