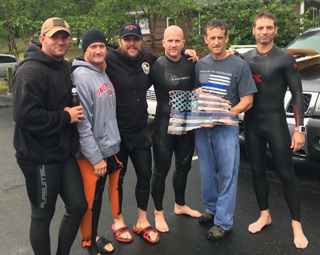 You knew they would make it, despite the rain, the nighttime cold and frequent cramps.

The Honor Swim raised $50,000 for scholarships for the children of two fallen comrades, Officers Sean Clark and Fred Thornton. Both died in the line of duty.

The swim was organized to raise $60,000 for two sons of Officer Clark – one of them not born before he died – and one son of Officer Thornton. Organizers are hopeful that more donations will get them closer to their goal.

Meanwhile, one of the event organizers, Officer Olin Lester, posted a moving account of the 24-hour swim from the I-40 bridge to their goal near McGuire Nuclear Station. The swim culminated with the sons of Officer Clark joning the swim for the last couple hundred yards.

Officer Lester with the sons of Officer Sharp – one of the two police officers being honored by the swim.

“As we began the hour-plus long boat ride up to the start point, I felt the stress melt away.

The load that was on my shoulders was gone. it was time to swim. I looked out onto the water and began to smile. I have a deep sense of inner-peace when it comes to the open water.

As I looked around, realizing that we were about to swim something that had never been swum before, I had to fight back the tears. This had been 2 years in the making, started from an idea drawn on napkin, and now it was before us for the taking.”

The following links will let you read the entire post, view the many photos posted on the Honor Swim Facebook page, and donate to the scholarship fund benefiting the children of Officer Clark and Thornton, who gave their lives to keep us safe.