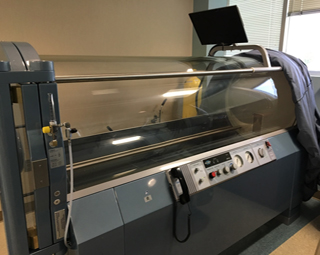 Carolinas ContinueCARE Hospital at University, a long-term acute-care hospital, has been operating on a limited basis since January as it completes an extensive licensing program. The nearly 13,000-square-foot facility is located on the fourth floor and can provide care for up to 35 patients.

What is a long-term acute-care hospital?

Long-term acute-care hospitals help address a major treatment issue nationwide: how to provide extended hospital care for patients with complex conditions while freeing up limited and expensive space in hospitals’ Intensive Care Units, where these patients typically are treated.

“With our population growth (across the Charlotte region), our ICU capacity at all our hospitals is very slim,” said Joe Labovitz, Vice President-Operations at Carolinas HealthCare System University. “If you can move people out of the ICU after three days, that frees up more space” for new patients.

Carolinas HealthCare System already operates long-term acute-care hospitals at its Pineville and Kings Mountain facilities but estimates that it needs 200 more beds. The University facility will add 35, “so we are just scratching the surface,” Labovitz said.

The healthcare system has entered into a joint agreement with Carolinas Community Care, a subsidiary of Texas-based Community Hospital Corp., to run Carolinas ContinueCARE Hospital at University. The self-contained hospital can make use of the University hospital’s resources, such as lab and X-ray services, for a fee.

Patients will come from hospitals throughout the region, where they have spent at least three days in an ICU and require at least 25 days’ additional acute care. After extended treatment here, patients may be able to move on to a nursing home, acute-care center or possibly their own home.

Finding space for the LTACH

The new LTACH will occupy the University hospital’s fourth floor, which previously housed general medical beds. Those beds, in turn, have moved to a new unit on the third floor, which means the hospital has received a new patient care unit, as well, Labovitz said. The third floor, previously the maternity area, has been vacant since the hospital created a much larger Maternity Center six years ago.

Beginning on June 6, University City residents with difficult wounds will find advanced outpatient care much closer to home. The Carolinas HealthCare System Wound Care Center at University will open on the second floor of the 5000 Building, which is attached to the main hospital.

“It’s important to be close to a treatment center, since you will come often,” Labovitz said. Treatment can be once a week for six weeks, or even daily for six weeks, depending on what type of treatment is needed, “so it definitely is our strategy to bring health care out to where people live.”

The new center here is the seventh operated by Carolinas HealthCare System. The 4,000-square-foot center has four treatment rooms to handle specialized treatment of chronic or non-healing wounds, which are defined as sores or wounds that have not significantly improved from conventional treatments.

A team of five-seven physicians with advanced training in wound management and specially trained nursing staff and technicians will care for 200-300 patients in the coming year, Labovitz said. There is the potential for the center to serve two-three times that number, he added.

The two new facilities continue the evolution of Charlotte’s first suburban hospital, which opened in 1985 just as University City began its explosive growth. Today Carolinas HealthCare System University serves an arc from Mint Hill to Lake Norman with 300,000 residents and tens of thousands of daily employees.

In the past six years, the University hospital has greatly expanded both its maternity and emergency departments (now the busiest emergency department in the Carolinas HealthCare System) and opened a branch of the Levine Cancer Institute in a new building addition near North Tryon Street.

The new long-term acute-care hospital’s 35 beds will raise the University hospital’s occupancy rate from 60%-70% to about 80%-90%, Labovitz said. With the opening of the long-term care hospital, “the building is full,” he said. “We have moved most of the administrative people to adjacent office buildings.”

What will light rail bring?

Now University’s leaders and the community are looking ahead to 2017, when the LYNX light-rail line begins operation on North Tryon Street. The J.W. Clay Boulevard Station is at the northeast corner of the hospital campus.

“What will light rail bring?” Labovitz asks. “If it grows here like it has on South End, can we expand more?”

The hospital staff has begun looking for models elsewhere for guidance. “The only suburban hospital we’ve found on a light-rail line is outside of Phoenix,” Labovitz said. “We’re thinking of a site visit to see how that changed things.”

The hospital, part of the Carolinas HealthCare System, is at 8800 N. Tryon Street and W.T. Harris Boulevard. CLICK to Learn more.