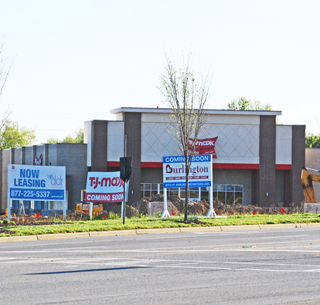 A TJ Maxx store and a Burlington Coat Factory store will open soon at Belgate.

Belgate shopping center – home to the only IKEA store in the Carolinas – continues to add tenants. The 156-acre retail hub at I-85’s University City Boulevard exit has construction under way for two national retailers, a hotel and a 266-unit apartment community. More is coming. Here are the details:

Construction has started on a 104-room Holiday Inn Express. Eastern Hospitality purchased the 8.7-acre site on IKEA Boulevard at University Pointe Boulevard in July 2015. The opening is planned for late this year.

Davis Development has completed extensive site work for the 266-unit Sovereign at Belgate apartment community. The site straddles IKEA Boulevard near University Executive Park. Davis Development, based in Atlanta, has developed, built and managed more than 50,000 apartments in the past 20 years.

Parcels still remain to be developed in Area A (between University City Boulevard and the IKEA store, near Zaxby’s) and Area D (along the south side of IKEA Boulevard near Furniture Row). SEE BELGATE SITE PLAN

The LYNX light-rail line and a new bridge over I-85 will soon bring significant new traffic to the Belgate center: