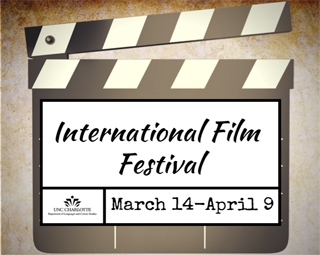 University City’s global perspective comes to the big screen, thanks to UNC Charlotte’s strong international programs and student associations. The International Film Festival, already under way, has 22 more films and guest lectures lined up through April 9. All films have subtitles, and all films and talks are free to the public.

Special programs with some films

Some films are accompanied by lectures, including tonight’s 7 pm viewing of “Hiroshima Mon Armour,” a 1959 French film shot in France, Japan and Mexico. Massoud Hayoun, an award-winning news producer for Al Jazeera America, will give an introduction of the film at 6 p.m.  In Summer 2015, he published an article on the film, based on an interview he conducted with actress Emmanuelle Riva.