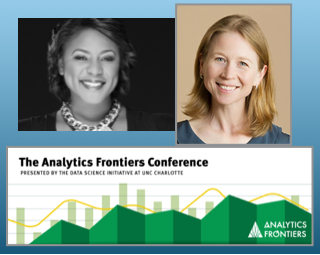 Three events in the next eight days underscore UNC Charlotte’s growing intellectual and economic contributions to the region.

Here are additional details of each event.

April Rinne and “The Sharing Economy in the Urban Millennium”

Thought leader April Rinne, an expert on shareable cities, will discuss “The Sharing Economy in the Urban Millennium” at 2 p.m., Thursday, March 24, in the Cone University Center McKnight Hall. This presentation is for the University’s TIAA Lecture Series.

Rinne is an advisor and guide on the sharing economy, the concept of a peer-based sharing of access to goods and services, coordinated through community-based resources. Examples include car sharing, the rental of apartments/houses and even the sharing of one’s talents and skills.

“Within the sharing economy, my main areas of focus are what it means for cities, policymakers, the future of travel and tourism and emerging markets,” wrote Rinne on her website. “The sharing economy is full of hard questions and unknowns. My goal is to show and help others discover how the sharing economy can create a more inclusive, resilient, robust future — and figure out what to do when not everyone’s goals can be met.”

According to its website, #BlackLivesMatter is an “online forum intended to build connections between black people and allies to fight anti-black racism, to spark dialogue among black people and to facilitate the types of connections necessary to encourage social action and engagement.”

Garza currently serves on the board of directors for the School of Unity and Liberation in Oakland, Calif. She has received numerous awards for her work in the Black and Latino communities.

UNC Charlotte is taking another significant move to stake its claim as a national leader in data analytics. The Data Science Initiative at UNC Charlotte will convene the Analytics Frontiers Conference on Wednesday, March 30, to address the latest updates in the high-powered use of technology to analyze massive amounts of data generated by consumers and organizations.

The conference is an outgrowth of the University’s top-priority Data Science Initiative (DSI), which has deep-seated support from prominent corporations and other institutions in retail, health care, energy and financial services.

“This conference is the next step in UNC Charlotte’s strategy to help Charlotte become a national hub for data analytics, an achievement that would have a major impact on the economy and higher education in this region,” said Mirsad Hadzikadic, professor of software and information systems and director of the Complex Systems Institute and the DSI.

In addition to keynotes from Kiron and Davenport, an afternoon keynote will address “The Promises and Challenges of predictive Analytics in the Age of Big Data.”  This presentation will be followed by a panel commentary moderated by Dr. Derek Raghavan, President, Levine Cancer Institute, and panelists Sully McConnell, Time Warner Cable’s VP of BI, and Ahmer Inam, Head of Analytics for Nike.

More than 30 speakers and panelists are participating in 15 breakout sessions.