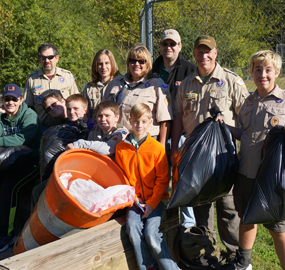 “We wore our uniforms that day, and we had quite a few people thanking us for what we did,” said David McKenzie, chair of the Troop 13 Committee.

Parent volunteer Kami Keeley, among several women leaders in Troop 13, led the greenway “treasure” hunt as part of her own Boy Scout leadership training. Before the Scouts began the creek cleanup, Scout Ethan Ivey gave an overview of the Seven Principles of Leave No Trace, particularly No. 3: Dispose of waste properly.

Founded in 1992, Troop 13 has about 45 members plus several adult leaders including longtime Scoutmaster Dan Schulte. Scouts learn many outdoor and leadership skills while earning various ranks and Merit Badges, taking part in community service projects and going on camping trips and high-adventure trips.

Scouting’s highest achievement is earning the rank of Eagle Scout. Since 1992, 88 boys in Troop have become Eagle Scouts.

Most Scouts will tell you that the best part of being one is going on trips. The ultimate for American Boy Scouts is spending time at the 214-square-mile Philmont Scout Ranch in rugged northern New Mexico. Troop 13 Scouts and leaders traveled to Philmont last summer, where they backpacked 80 miles over 10 days.

Next summer, Troop 13 Scouts will spend several days sailing, fishing and snorkeling off the Florida Keys aboard a 70-foot sailing schooner.

These activities cost money, and the Scouts work hard to pay their way. You can find Troop 13 Scouts and parents serving Bojangles fast food at UNC Charlotte 49ers football games this fall. The Troop also holds an annual barbecue and silent auction.