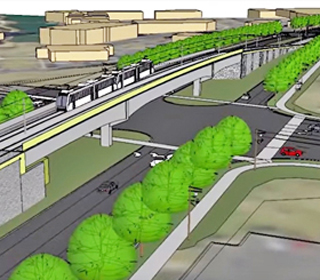 The Blue Line Extension has reached a critical milestone. After a summer of preparation, construction of the light-rail bridge over the WT Harris Boulevard-North Tryon Street intersection has begun. This bridge is the last on the BLE alignment to begin construction and crosses over one of the most heavily traveled intersections in North Carolina.

Once complete, this structure will have two sets of columns, supporting three spans of girders, which total approximately 550 feet in length. The columns will be constructed outside of the travel lanes, just beyond the crosswalks on the north and south sides of the W.T. Harris Boulevard intersection. These columns will support the center span of the bridge that crosses over the roadway.

Artwork to enhance the structure

Art will be incorporated on the columns of the bridge in additional to the mechanically stabilized earth walls. Pedestrians and motorists passing beneath the bridge will be able to view pitcher plant images on the column tops. Pitcher plant columns will also be included on the walls’ design amid the trap plants, sun dew, and leaves that are visible on the light rail bridges going over I-85 and University City Blvd.

Over the summer, construction crews worked toward completion of the new roadway between Ken Hoffman Drive and JM Keynes Drive. Sidewalk, driveways, curb and gutter were constructed as crews laid pavement for the configuration of the new traffic lanes.

In early September, traffic was shifted onto the new pavement to open up the median where the new light-rail bridge will be located. This traffic shift was paramount to begin construction of the structure that will carry the light rail tracks over WT Harris Boulevard.

Crews have started erecting the structure that will support the ends of the bridge. When the supporting walls are constructed up to the necessary height, crews will be able to begin end-bent construction. End bents are reinforced-concrete structures that support the bridge girders at the edge of the walls. Crews area also assembling the walls and drilling shafts for four 5-foot-wide columns.

North Tryon Street traffic will experience frequent lane closures through the fall as crews continue paving operations. Multiple layers of asphalt will be installed to raise North Tryon Street to the new grade, which in some areas will be a few feet higher than the existing roadbed.

When paving the existing travel lanes, crews pave one layer at a time, alternating right and left lanes. This allows the crew to maintain traffic flow through the area by installing lane closures that alternate lanes throughout the day.

During this construction of the light-rail bridge over WT Harris Boulevard, motorists should expect increased traffic control at the Harris-North Tryon intersection. CATS has partnered with the state and Charlotte transportation departments and other agencies to develop plans to manage traffic during construction. These plans were developed with the safety of the traveling public and construction crews in mind.

Please note that the speed limit on North Tryon Street has been reduced to 35 MPH in the BLE project area. Both motorists and pedestrians should use caution while obeying signage, message boards and flaggers for direction. Remember to maintain a safe following distance between cars, and please do not drive distracted.

Jennifer Duru is stepping down as the liaison between Charlotte Area Transit and the North Tryon Street businesses along the LYNX construction zone. Going forward, businesses with questions or concerns about the construction should contact Hillary Ryan, senior public and community relations specialist, at 704-432-2549 or hryan@charlottenc.gov.

This article was provided by the City of Charlotte and the Charlotte Area Transit System. To keep up with the Blue Line Extension project: