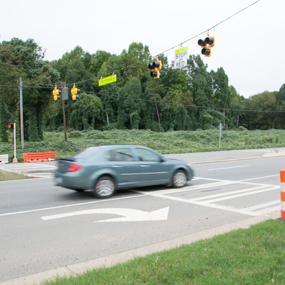 Pedestrians and cyclists have a growing number of signalized crosswalks across University City’s busiest highways, even midway between major intersections.

Two other mid-block crossings began operation in the last year – on University City Boulevard midway between Suther and John Kirk roads, and on J W Clay Boulevard near the lake at University Place.

The HAWK beacon, short for High-Intensity Activated crosswalk, was pioneered by Tucson, Arizona, in the 1990s to provide safer pedestrian crossings on major thoroughfares where additional traffic signals for vehicles were not wanted. The idea quickly spread, helped along by research showing as much as a two-thirds drop in the number of pedestrians struck by vehicles in the new walks vs. traditional crosswalks.

In University City, all the beacons provide pedestrian and bike crossings in areas with plenty of foot and bicycle traffic but no nearby road intersections.

“This is a technique that has been embraced by the engineering community,” says Scott Curry, Pedestrian Program manager for the City of Charlotte. “It’s one we have been eager to use, to get folks across the road more safely.”

Safer paths to campus and greenways

The University City Boulevard crossing serves residents of the University Walk apartments, directly across the highway from UNC Charlotte, and other nearby student housing.

Before the beacon crossing went into operation last spring, students could either walk up to a quarter mile along busy University City Boulevard to pedestrian crossings at Suther and John Kirk Roads, or dash across 6 lanes of traffic and a grass median. On a recent weekday afternoon, students queued up at the new pedestrian crossing every 2-3 minutes.

Several more traditional bike-ped crossings at highway intersections on and near campus are being added or upgraded.

A fully signalized UNC Charlotte entrance with pedestrian crossing signals is expected to begin operation in late November at Cameron Boulevard and University City Boulevard. The signalized crossing is near the growing South Campus residential area and will provide the most direct path yet for for South Campus cyclists and pedestrians headed to nearby Town Center Plaza.

As part of the LYNX light-rail project on North Tryon Street, several intersections between Institute Circle (the UNC Charlotte entrance) and Tom Hunter Road will have signalized traffic and pedestrian crossings, once roadway reconstruction is finished in 2016.

(from the NC DOT)

These pedestrian hybrid beacons, or HAWK (High Intensity Activated Crosswalk) signals as they are more commonly referred to, are located over the roadway, and consists of six intervals in each sequence: