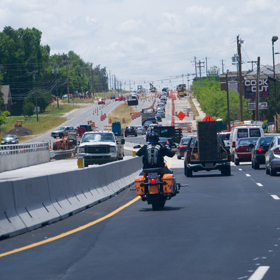 Just in time for the year’s biggest weekend of NASCAR racing at Charlotte Motor Speedway, the state opened a new North Tryon Street bridge over Mallard Creek on Friday, May 22, and ended the seven-month detour of southbound traffic. Mallard Creek Greenway users, however, will find their construction detour closed for a while.

Next up – work on northbound bridge

The next construction phase will begin around June 1 when the state closes the northbound bridge and begins replacement. This new closure will not require a traffic detour, however. Instead, the state will divert northbound vehicles onto the new bridge, which Cooksey said can handle two lanes of traffic in each direction. The contract calls for the bridges to be finished by August 2016. The city of Charlotte is paying the state to add the bike lanes and sidewalks.

New greenway detour is in the works

The next phase of the bridge project has forced the state to close a detour that has allowed users of the popular Mallard Creek Greenway to continue their bike rides and jogs by following a path beside the southbound side of North Tryon Street. However, a replacement detour is in the works, says Brett Canipe, an engineer with the state Transportation Department.

“The crossing will be operational as soon as the greenway detour can be constructed,” Canipe said in an email this week to University City Partners. “We are working on that now.”

Canipe said that the new detour will use a pedestrian beacon – basically a highly visible traffic signal for cyclists and pedestrians – to provide safe pedestrian and bike passage through the bridge construction zone. The state is installing a similar crossing on University City Boulevard between UNC Charlotte and student housing just south of Mallard Creek Church Road.

On North Tryon Street, the state will link the Mallard Creek Greenway path to the temporary highway crossing near Ortho Carolina via permanent ramps on the outside shoulders of the north- and south-bound traffic lanes. These ramps will remain after the bridge project is completed next year.

The state will not build additional sidewalks along North Tryon Street beyond the limits of the bridge project, but Canipe noted that the city usually requires sidewalks when new buildings are added. Both the nearby Cook-Out restaurant and Ortho Carolina have sidewalks along their street frontage.