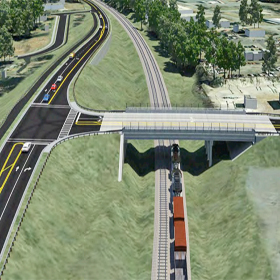 Old Concord Road is closed while workers raise the roadway several feet and build a new bridge for Grier Road.

Three new bridges will provide much needed connections across I-85 and the NC Railroad for pedestrians and cyclists as well as vehicles.

Work will start this fall on the first of two I-85 bridges intended to link University Research Park to light-rail stations on North Tryon Street. Another bridge project will help maintain safe crossings along the busy NC Railroad corridor.

City planners say that the I-85 bridges will greatly improve the ability of people working in University Research Park to access light rail as well as North Tryon Street’s commercial district. Voters approved funding in last fall’s city bonds referendum to build the I-85 “south” bridge linking University Pointe Boulevard, which runs beside Wal-Mart, to IBM Drive via an existing road next to Martin Middle School.

Voters also approved money to plan the I-85 “north” bridge between Doug Mayes Place in University Place and Research Drive in University Research Park. Money to build the second bridge will be included in a bond package going before voters in 2016. If voters approve that funding, construction could start in fall 2017.

Neither bridge will connect to I-85. Instead, the bridges will carry “low-speed, human-scale, two-lane roads with bike and pedestrian lanes” over the interstate, Magnasco said. The bridges will take about two years to build, meaning that the I-85 South bridge should open shortly after the start of light-rail service on North Tryon Street.

View of Grier Road extension and new bridge over NC Railroad tracks. Orr Road is in foreground, Old Concord Road in the distance.

Meanwhile, the state has begun work to extend Grier Road to a new intersection with Old Concord Road via a new bridge over the NC Railroad tracks. The $13.7 million bridge and roadway are part of The Piedmont Improvement Project, a $500 million statewide rail improvement project that, when finished in 2017, will significantly improve both safety and speed along the 173-mile rail line between Raleigh and Charlotte.

The state closed Old Concord Road earlier this spring between Farmfield Road and Branch Hill Circle to allow for construction of an elevated roadway that will eventually hold the new bridge and intersection with Grier Road. The detour will end this fall, said Warren Cooksey, spokesman for the NC Transportation Department’s Charlotte area operations. Once the complete project is done the following year,  the state will close the at-grade crossing for Newell-Hickory Grove Road. The state also plans to improve the rail crossings at Orr, McLean and Back Creek Church Roads.

The Piedmont Improvement Project will add 13 bridges, remove 23 grade crossings and install 32 miles of double track statewide, including 12 miles of track in University City and Harrisburg. Having dual tracks all the way from Raleigh to Charlotte will allow passenger service to run at a predictable schedule for the first time since the early 1980s, when several sections of dual track were removed due to low demand.

4th key bridge could be decade away

A second major bridge contained in the Piedmont Improvement Project may not get built for several years, Cooksey said, due to changes in how the state prioritizes road projects. The bridge is part of state and Charlotte long-range plans to extend Mallard Creek Church Road south several miles. City voters approved $12 million in transportation bonds last fall to build a couple miles of the roadway, starting at Hanberry Boulevard between the Villages of Back Creek and University Heights.

The state rail improvement project calls for the state to build the bridge and the short stretch of roadway from NC 49 to Hanberry. Once the bridge is operating, the state would to close the busy at-grade crossings at Back Creek Church and McLean roads as a way to increase safety along the corridor. Cooksey said that the bridge project currently is not planned until at least 2024, although there are efforts under way to get funding sooner. The city portion of the highway is to be built in synch with the state project.