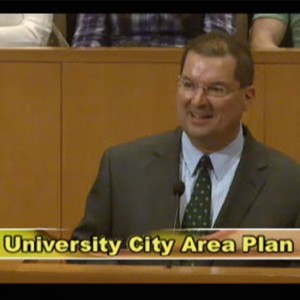 The long process to update a development plan for our transit stations moved closer to completion on Monday as City Council heard strong public support to adopt the University City Area Plan update. “This will be critical in linking the university to nearby employment centers and business district,” said UNC Charlotte Vice Chancellor Robert Wilhelm, one of 16 speakers.

“We have the most transformative event ever to happen in this area. It is extremely important that the transit that goes in the middle of U.S. 29 is done well,” added George Maloomian, founder and president of Cambridge Properties, which created the Mallard Pointe shopping center across North Tryon Street from the university’s Charlotte Research Institute.

Maloomian, Wilhelm and others addressed the city council at a public-comment meeting that is one of the last steps before the council votes later this spring on whether to adopt the updated University City Area Plan.

The University City Area Plan is the city’s main guide for shaping how the coming LYNX light-rail line can transform the North Tryon Street corridor around University City’s three future transit stops – much the same way that that the original LYNX Blue Line from uptown to Pineville has attracted walkable urban development near stations in South End and beyond.

Charlotte City Council adopted the current University City Area Plan in 2007 as Charlotte sought federal and state funding for the Blue Line Extension. The final transit plan has fewer stations, some of them in different locations, requiring a revision to the UC Area Plan. Also, the city has learned more about transit-oriented development over the past decade as growth has occurred along the existing line.

Key elements of the 2007 University City Area Plan remain in the new draft: encouraging urban-style development within walking distance of the light-rail stations, linking that new development to nearby employment centers, and envisioning a future city center at University Place.

Strong support from all speakers

All of Monday’s speakers offered strong support for adopting the plan, often with personal stories on how the transit line would help them.

James Parkhill, a civil engineering student and Levine Scholar at UNC Charlotte, said he lives within a mile of campus but has no safe way to get to class without a car. “If I had a transportation option other than driving, I would be more than happy to avoid the traffic and the parking fees,” he said.

Rusty Price, lead pastor of Camino Church of the Way, said the future University City Boulevard station will be a boon to his congregation’s outreach ministry, the Camino Community Center, and the people who come, often from across Charlotte, for the center’s job training, free medical clinic, food pantry, thrift store and dinner for homeless men.

“We have one volunteer who takes three city buses, and it takes her two hours each way, so we’re very excited about these plans,” Price said. “We believe this transportation will help us be much more connected.”

Corrective rezonings sooner rather than later

At the start of the public comment meeting, Planning Department staff member Mandy Vari gave a brief overview of the plan and noted, “The plan does not recommend corrective rezonings.”

“We are interested in asking our colleagues to consider a transit supportive overlay for the land area immediately adjoining the three transit stations in the Area Plan, which would be a 1/4 mile walking distance,” Heater said in a letter read by UCP staff member Janelle Goodrich. “We recognize there is considerable research, communication and analysis that must be done. We request this work be done swiftly, thoroughly, justly and transparently.”

Martin Zimmerman, UNC Charlotte’s past director of facilities planning, encouraged the City Council to approve straight Transit Oriented Development zoning as soon as possible rather that use an overlay district. “The time is now for corrective rezoning,” he said. Don’t wait for the market to decide when and where it is appropriate, he added.

Walter Fields, a planning expert representing the owners of Mallard Pointe, questioned why the plan draft recommends limiting buildings at Mallard Point to five stories or less and appears to discourage retail in the future on the 15-acre site.

Nancy Reitz, representing the owners of the Shoppes at University Place, said her company has worked with the city staff for two years on a redevelopment plan to bring national and local restaurants, retail and service providers to University City.

“Although we are very excited about many aspects of the University City Area Plan, we have concerns about the development restrictions and encumbrances that this may bring to our impending project,” Reitz said. She said her company also continues to talk with city staff about ways to address the plan’s vision while meeting the needs of their owners and lenders.

“We are excited about the Blue Line and the vision (in the University City Area Plan) and look forward to being a part of the transformation,” she said.

Vari said that planning staff will work with key property owners and businesses on plan refinements while also meeting with the City Council’s Transportation and Planning Committee. That committee will make a recommendation on the completed plan to the full City Council. The council will then vote whether to adopt the revisions.