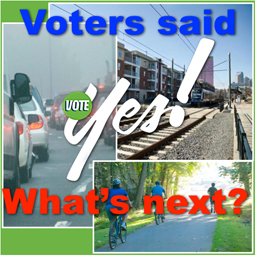 University City received a big green light on Nov. 4 for several transportation projects, thanks to voters’ overwhelming approval of $146 million in city bonds. Some projects, such as a bridge spanning I-85, can start soon. Others will need bonds scheduled for 2016, 2018 and 2020 to complete. Here’s an overview of projects and timetables.

I-85 “South Bridge” between IKEA Boulevard and IBM Drive

• Funding: $15.1 million
• Project description: This two-lane bridge with sidewalks and bike lanes and a second one planned for construction in 5-6 years will provide important new links between University Research Park and the North Tryon Street light-rail corridor while easing traffic congestion on two of Charlotte’s busiest streets: West W.T. Harris Boulevard and Mallard Creek Church Road. Since the bridges will not have interchanges, they can provide safe bike lanes and sidewalks over I-85. Construction should start in 2015 and finish in spring 2017.

• Funding: $12.1 Million
Project: This new roadway segment and a new state-funded roadway and bridge near University City Boulevard are the first steps in constructing a major highway paralleling I-485 in eastern Mecklenburg County. The state’s $23 million portion of the project will start at the current end of Mallard Creek Church Road, pass under the major Norfolk-Southern rail corridor beside University City Boulevard and continue to nearby Hanberry Boulevard. Charlotte will build the next leg of the new roadway from that point to Back Creek Church Road near John Russell Road. The new roadway will have bike lanes and sidewalks.
The bridge project is part of major state effort to increase the speed, volume and safety of the main rail line between Charlotte and Raleigh. A second set of tracks is being added in Cabarrus and Mecklenburg counties. Several road crossings including the one at Newell-Hickory Grove Road will also close. The state expects to finish the rail improvements, including the new bridge and roadway, by May 2017.
• Learn more about rail project: http://www.ncdot.gov/projects/harrisburgcharlotte/

• Funding: $20 million approved in November; $40 million, 2016; $40 million, 2018; $20 million, 2020.
• Project description: Completion of I-485 will spur development along its path through University City, especially at the Prosperity Church Road triple interchange. A new area plan nearing approval for this area, including Highland Creek, spells out many public improvements that should accompany that growth, including greenways, additional streets with sidewalks and bike lanes, parks and open space. This project will provide those improvements over the next decade.

I-85 “North Bridge” between University Place (Doug Mayes Road) and University Research Park (Research Drive)
• Funding: $3 million in 2014 for planning; $12.5 million in 2018 for construction
• Project description: This two-lane bridge with sidewalks and bike lanes and a second one funded for construction in the 2014 bonds (see above) will provide important new links between University Research Park and the North Tryon Street light-rail corridor while easing traffic congestion on two of Charlotte’s busiest streets: West W.T. Harris Boulevard and Mallard Creek Church Road. Since the bridges will not have interchanges, they can provide safe bike lanes and sidewalks over I-85.

• Funding: $5 million in 2014 for planning; $30 million in 2016 for construction
• Project description: Charlotte and Mecklenburg County are teaming up to create a 26-mile trail and greenway running from University City to Center City and Pineville and linking several existing greenways including Mallard Creek, Clark’s Creek and Toby Creek.

These improvements for University City are part of Charlotte’s massive Community Investment Plan. Learn more about the full scope of the program at  http://charmeck.org/city/charlotte/charlottefuture/Pages/default.aspx