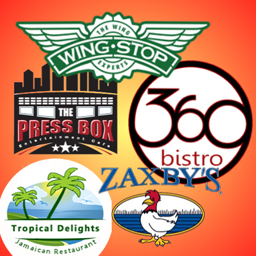 Here’s a quick look at the latest restaurants to open, plus a hint at more to come.

360 Bistro has gotten dozens of great reviews on Yelp, Google and Facebook since opening in July on Harris Boulevard’s restaurant row near I-85. The restaurant was already pleasantly full and fragrant when we stopped by for an early evening dinner last week. Many of the entrees reflect co-owner Dan Glasser’s Philadelphia roots and love of Italian cooking. The menu includes numerous personal-sized pizzas, sandwiches such as the salmon BLT with fried green tomato (soon to come on focaccia bread, Dan says), and several choices of locally brewed craft beers. Check Facebook and the360bistro.com for the latest dining and beverage specials and mouth-watering photos.

“There’s More To It,” reads the website homepage. By that, the owners might mean the dozen 9-foot diamond tables in the Press Box’s “state of the art” poolroom.

Or perhaps the generous portions of some of their signature dishes, such as the Pylon – “A burger of volcanic proportions. American cheese and cheddar, piled high with onion rings, bacon bits and Jack Daniels bbq sauce – $10.50.”

Or the surprise of also finding, among the entrees, Salmon Vin Blanc – “Salmon infused with white wine and lemon, atop a mound of roasted garlic smashed red potatoes and asparagus – $16.95.”

Or maybe the wide assortment of beers, including 24 on tap, 28 bottles and 2 cans. You know a place is serious about beer when it has its own online beer menu. We’ll let you visit and decide.

“Tropical Delights is a restaurant that serves delicious Jamaican and Caribbean cuisine in a wonderful atmosphere,” says the restaurant website. “Our food is made from scratch with only top quality ingredients, including spices, vegetables, and fresh fruits.”

The restaurant menu includes Jerk Chicken, Curry Goat and the very popular Ox Tail. And expect dishes with some heat. “The hot and spicy barbeque style of cooking is a Signature product of households in Jamaica,” the website explains. “Experience the sumptuous essence and the tasty escapade of pure Jamaican food roll down your tongue where you savor each delicacy so exquisite that it turns into a festival of spices and mixture to your senses at Tropical Delights.”

Charlotte’s first Wingstop restaurant opened in University City last spring. We’ll likely see many more, as Wingstop spreads its wings around the globe (they already have restaurants in 35 states, Mexico, Singapore, The Philippines, Indonesia and even Russia). The specialty, of course, is chicken wings. Wingstop says it has sold more than 2 billion since launching its first of 600-plus restaurants in 1994.

“We keep the sole focus on saucing and tossing wings, boneless wings and strips that are cooked-to-order and served piping hot in your choice of 11 savory flavors,” says the website. Those flavors range from Teriyaki (mild) to Atomic (take a wild guess). Boneless strips feature all white meat. You can add several sides including Bourbon Baked Beans, seasoned fries and veggie sticks.

For another take on chicken, try the new Zaxby’s near IKEA on University City Boulevard. Yes, it has several wings dishes, but also several other chicken plates, salads and sides. “An alternative to fast food, Zaxby’s offers prepared-at-order chicken fingers, wings, sandwiches and salads,” says the company website.

Zaxby’s most popular items are its hand-breaded Chicken Fingerz and Traditional or Boneless Wings, smothered in a choice of nine sauces with names like Wimpy, Tongue Torch, Nuclear and Insane.” University City’s Zaxby’s features a 3,847-square-foot restaurant that can seat 90. Zaxby’s also offers drive-thru service.

More dining on the way