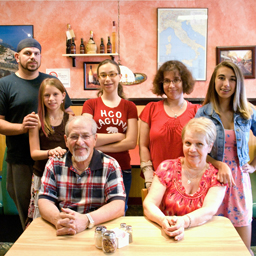 The stories of Amalfi Pasta ‘N Pizza and University City are as intertwined as, well, spaghetti. Our oldest family-run restaurant opened 20 years ago near UNC Charlotte. Since then, Mike and Olympia Basso have witnessed the coming of University City’s first sit-down chain restaurant, first high school, First Union CIC (remember First Union?) and first 49ers football game – plus the birth of the Bassos’ three grandchildren at CMC-University!

Just like University City, the Bassos have prospered by being Green, Global and inGenious.

The story of Amalfi the restaurant really starts in the 1960s in the town of Amalfi, Italy. Olympia already loved cooking and spent many days hanging out with childhood friends at her favorite restaurant, Il Paradiso. Like most Italian restaurants then, Il Paradiso was a family affair with mother in the kitchen, father doing something else and the children helping, too.

“We’d go there all the time,” she says. “It was almost like they saw us as their children. We’d go into the kitchen and watch them cook and they’d tell us how they did it.” Olympia not only watched; she learned and dreamed of having her own restaurant one day.

Italy was a hard place to get ahead back then. At 18, Olympia boarded a ship for New York City. Her mom had come three years earlier and soon introduced Olympia to a young man who worked at the grocery store. Yeah, that was Mike. Love. Marriage. Kids. Then in 1986 Mike’s employer, Royal Insurance, chose Charlotte for its new headquarters and sent Mike to help set things up. Olympia and the kids – Linda, Michelle and little Michael – followed a few months later.

Olympia also brought along her dream to start a restaurant with her favorite Il Paradiso recipes and a few of her own. She got the chance in 1994,  with  strong encouragement from hard knocks. Royal Insurance decided to cut costs in 1993.

“Royal fired me, and she hired me,” Mike can joke now. Mike consulted experts in launching small businesses. Their best advice, Mike says: Have enough money to pay expenses for two years. Most new restaurants don’t, and they quickly fold, he adds.

Autumn 1993 was hectic and scary. “I was terrified,” Olympia says. “I knew there were a lot of Northerners in Charlotte,” but would Southerners like her true Italian dishes? What if Amalfi opened and nobody came? Well, she thought, the kids could work for free …

‘When are you going to open?’

Mike put his marketing background to work. He posted a big sign in the window: Opening Soon – Pizza, Calzones, Pasta. Olympia’s brother, a grad student at UNC Charlotte, helped Mike stick flyers on cars. People did notice. And remember – University City was still so young it lacked even one sit-down chain restaurant. “People would look in the window and ask, ‘When are you going to open?’” Olympia recalls. “As soon as we opened the doors, people poured in.”

And the Basso kids did pitch in – waiting tables and helping in the kitchen. “Michael was a little boy when he started working here,” Olympia says. She later taught him to cook, “and now he’s a good cook.” Mike, meanwhile, became the official greeter and face of Amalfi to many customers.

Twenty years later, Linda, Olympia and Mike sit around a table at Amalfi and marvel at the life changes they’ve experience here and witnessed in their many regulars. “We’ve seen so many families come, get engaged, marry, have children …. Wow! This is a lifetime!” Olympia says.

One of those big moments nearly happened here for the Basso family 15 years ago with the birth of Linda’s first child, Paxton. The doctor had told Linda she could work as long as she felt OK, so Linda did. “When it’s your first child, you don’t know,” Linda admits. On a particularly busy Saturday night, she waited tables until midnight.

Labor pains arrived two hours later; the baby came soon after that at CMC-University. All three grandchildren were born there, Mike adds. “We’re really University City oriented!“ None of the grandkids works at Amalfi yet, but you’ll see one or two of them sitting in a booth on many days.

A taste of Naples in every dish

From the beginning, Amalfi made many friends with its tasty thin-crust New York style pizza and authentic dishes from the Naples area of southern Italy. Longstanding favorites include the thin-crust and Sicilian thick-crust pizza, stromboli, calzones, lasagna and chicken parmigiana. Olympia makes all of her rolls for subs and dinners, too.

Many people settle on a particular dish. “I have a customer from Waxhaw who drives here just for the eggplant parmigiana,” Olympia says. Mike’s favorites include the Penne All’Arrabbiata and chicken al Vino Bianco – chicken breast cooked in butter, wine and lemon sauce, topped with spinach and cheese.

The current menu includes more than 30 pasta, chicken, veal and vegetarian dishes, plus nightly specials. Many of the specials are Olympia’s creations.  The most popular may make it onto the permanent menu. “I don’t put everything on the menu,” she says, “because if I did, we’d have a menu that never ends.”

Nor does Olympia share her recipes. ““Do you know how many people have asked for the recipe for tiramisu? The tiramisu is a killer!” Michael says proudly of Olympia’s take on the coffee-flavored dessert.

You can see the slow evolution of local tastes and customers in the subtle menu changes over the years. Customers requested pineapple on pizza for long time, Mike says. He can’t imagine why they would want it, but he added pineapple, and customers do like it. Recent additions include Philly Cheesesteak at lunchtime, Meat Lover’s Pizza, craft beers (Michael’s idea) and gluten-free pasta. Just ask for it when you order, Olympia says.

The menu also displays a fondness for green – 49er green. UNC Charlotte students, faculty and staff can enjoy it all at a 10% discount – a sign of just how important the nearly 30,000 people working, living and studying across the street have become to Amalfi and its neighbors at Town Center Plaza.

After 20 years, what else can the Bassos do to improve Amalfi? Olympia breaks into a broad smile when Mike talks about her upcoming trip to visit family and restaurants in Italy. Like University City, Italy in general and her hometown near Naples have undergone many changes over the last two decades. A hotel has replaced her favorite childhood favorite restaurant. The people are changing, too. “When I go to Italy now I feel like I’m in New York,” she says. “I see black and Indian people. Right near where I grew up, there’s a whole area that is Chinatown, just like New York!”

And Italian food, well, that’s changing too, with chefs mixing ingredients like meat and seafood that never went into the same sauce in the past. Olympia can’t wait to try them out, figure out the ingredients and find new “specials” to delight diners at Amalfi – “something fresh, something new,” she says.

Visit Amalfi – or have it delivered!