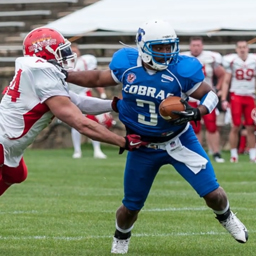 The Charlotte Cobras battle FDNY Bravest in a 2013 game at Charlotte's Memorial Stadium.

You can wait until fall for the next Panthers game – or catch summer’s hottest football ticket this Saturday right here in University City. Ex-Panther Kemp Rasmussen and his fellow Cobras – all members of public-safety departments – seek to avenge their 2013 national championship loss to the NYPD Finest (Yeah, those guys!). Tickets are just $5, parking’s free, and so are kids 12 and under. So come, explore our new Jerry Richardson Stadium, and cheer on the Cobras to victory!

“This is a huge game for us, and we’d like to get redemption,” says defensive back and Charlotte-Mecklenburg Police Officer Vinton Simpson of last June’s 9-6 defeat in New York City. “This is really good football,” he adds. “A lot of our players have played in Division One programs.”

That world record belongs to Roseboro. A power-lifting enthusiast and former firefighter and medic, Roseboro traveled to the Mojave Desert in March at the invitation of the TV show Guinness World Records Unleashed. While video cameras recorded the feat, Roseboro crashed through 10 closed, flaming doors The old record – yes, someone else has done this before – was 17 seconds. Roseboro burst through the last door at 12.84 seconds! Now imagine the intensity he brings to a Cobras football game!

Teams from across the U.S. compete

The Cobras compete in the National Public Safety Football League. Players must be sworn law enforcement, firefighter or medic personnel. The Cobras, for instance, pull from 10 agencies in Charlotte and nearby towns. Teams support local charities with their ticket proceeds. Since Simpson and others launched the Cobras eight years ago, the team has donated more than $50,000 to programs such as Camp Care and Cops 4 the Cure. Cobras also coach and mentor youth involved in the Police Activities League.

Cobras play for fun, friendship and a desire to help

Why go out and take a bruising when you’re not a kid anymore? Simpson, still a starter at 45, says that many Cobras are like him – they played in high school and maybe in college and continue to enjoy the game and the fellowship that sports teams can provide. “We consider ourselves a family, for one thing, and all of us love the game of football,” he says. “It takes us back to our youth a little. And the camaraderie and giving back to the community, all of the guys believe in that, as well.”

Teams play just four games in April and May, unless they make the playoffs. That means that every game counts. Last spring at Charlotte’s Memorial Stadium, the Cobras and the FDNY Bravest (New York City’s Fire Department team) waged a fierce defensive battle that ended with the Cobras batting down a point-after try to win 7-6. On the other hand, the Cobras have the ability to score fast and often. Two weekends ago at Hough High, the Cobras hammered the Atlanta Defenders 40-7.

Which Cobra’s team will show up Saturday at Richardson Stadium? That is where a big and loud hometown crowd – us – can make the difference.