Next up – new North Tryon Street bridges over Mallard Creek 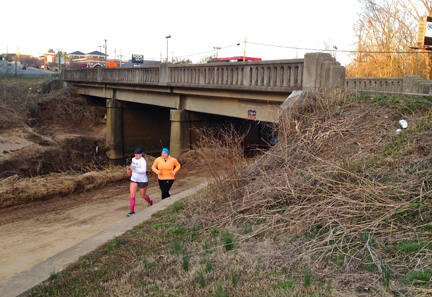 Almost as soon as the state completes the long awaited widening of I-85 in April, work will begin on another much-needed improvement to a key University City artery. The state will replace the North Tryon Street bridges over Mallard Creek starting this spring.

Southbound traffic will face a seven-month detour to I-85 beginning in late summer. Busy Mallard Creek Greenway “traffic” also will get a yearlong detour. Northbound vehicle traffic, however, will be spared, since the wide new southbound bridge will have room for two lanes of traffic each way while workers build the northbound span.

When finished in late 2015, the new bridges will have three lanes for vehicles plus space for pedestrians and cyclists. The City of Charlotte provided more than $130,000 for the pedestrian-bike lanes.

The state’s concern for users of the Mallard Creek Greenway shows how popular and even necessary our greenway network is becoming. Mallard Creek Greenway provides the safest way for joggers, walkers and cyclists to get between UNC Charlotte and thousands of nearby apartments, on the east side of I-85, and University Research Park and neighborhoods to the west.

The state plans to create a temporary detour path along the northwest side of North Tryon Street to Mallard Creek Church Road and the nearby Kirk Farm Fields. Mecklenburg County also is creating an alternate connection between UNC Charlotte and the Mallard Creek Greenway.